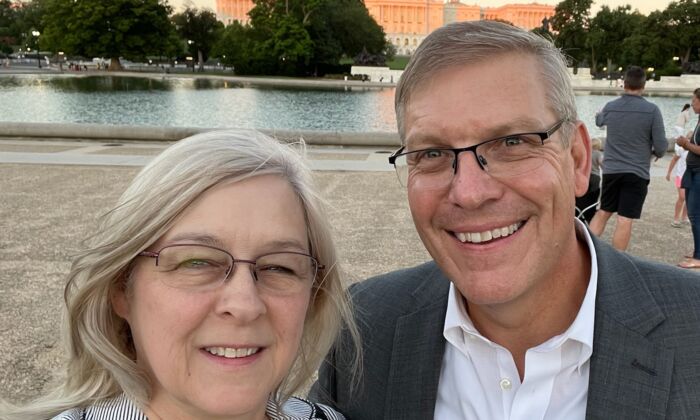 It’s all politics, all the time in Congress, so escaping the drumbeat of favor-seekers, lobbyists, and fundraising pressure via the sanctuary provided by Randy and Kimberly Genau is special, according to the wife of Rep. Barry Loudermilk (R-Ga.).

“Kimberly is really non-political; she never talks about issues or things like that,” Desiree Loudermilk told The Epoch Times on Sept. 20. “She just wants to be there, to talk with you, to pray with you, to just support and uplift us.

“She offers many opportunities for the spouses and the members to come and just fellowship in a non-political environment. We never leave without her and Randy praying for us. They make us feel very supported and just free to be ourselves,” she said.

That sanctuary is Alabaster House, the Genaus’ home on 10 scenic acres in the forested countryside near Gaithersburg, Maryland. Alabaster House is a tax-exempt foundation devoted to “providing spiritual resources to government leaders through confidential prayer, biblical devotions, and friendship.”

Dozens of members of Congress and their spouses are expected Tuesday night at the Museum of the Bible for the annual Alabaster House Gala.

The gala will feature personal testimonies, a special program on the enduring relevance of George Whitfield, the central figure in the Great Awakening in the American colonies that paved the way for the Revolution of 1776, a silent auction, singer Connie Wantling, and remarks by Hobby Lobby President Steve Green, who is also the founder of the Museum of the Bible.

Among the members expected to present their personal testimonies is Loudermilk, who was first elected in 2014 and has been reelected three times since that first victory.

Loudermilk praised Alabaster House as “an escape that you don’t get in other places,” noting that when he served in the Georgia state legislature, it was a part-time job, and people knew him as the business owner, a neighbor, or as the coach of the Little League team.

Not so in Congress.

“When you are in Congress, not only is it full time, you don’t escape that by going to another job, but it’s a much higher profile and everyone sees you as their congressman,” the Georgia Republican told The Epoch Times.

“We go out to eat somewhere, and somebody will recognize you. They will want to talk about what’s going on, especially right now when people are literally scared with all the mandates and what’s going on.

“Especially in D.C., having a place where you can go and just escape for a little, you can talk as friends, minister to one another, and it’s kind of have this release where you know nobody is going to ask you where do you stand on an issue or how you’re going to vote on the upcoming bill.”

Being in Congress, especially in the House—where members typically commute back and forth to their districts every weekend and must face the voters every two years and reelection campaigns essentially the day after the last votes are counted—can put extraordinary pressure on even the best of marriages.

“Of course, we’ve seen marriages break up, so it’s very important to be able to get together specifically as couples,” Mrs. Loudermilk said, “to share something that nobody out there can possibly understand. It’s much like being in the military.”

Asked about the current state of hyperpartisanship in Washington, Rep. Loudermilk said he believes Alabaster House could be a tool in restoring a heightened sense of common purpose in Congress, particularly among members on both sides of the aisle who share a common faith.

“It could if you brought people in where the focus is something we have in common, which is our faith, and you set the politics aside and you are looking at each other as human beings, as Christians,” Loudermilk said.

Bost said in a recent video on the Alabaster House website that “as a member of Congress, I know this might shock you, but there are meetings that you go to because you have to, lots of them. But Alabaster House, you want to go there. This is a place of rest, comfort, and friendship.”