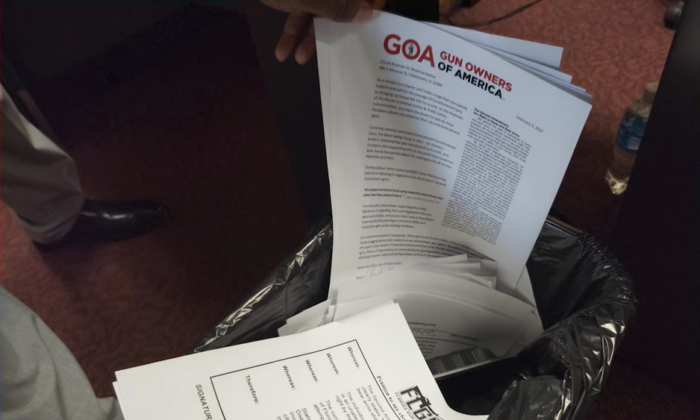 Petitions gathered by members of gun rights organizations were thrown into a trashcan By Florida State Rep. Chuck Brannan's legislative aide soon after being delivered to the office. (Courtesy of Luis Valdes)
Florida

'The color literally drained from his face'
By Patricia Tolson

On Tuesday, Feb. 22, members from Gun Owners of America (GOA), the Republican Liberty Caucus (RLC), Capitol City Young Republicans (CCYR), the Republican Hispanic Assembly of Florida (RHAFL), and Florida Gun Rights (FLGR) held an impromptu rally at the Capitol Building in Tallahassee, Florida, in support of House Bill 103, the constitutional carry bill currently stalled in the Florida House. During the rally, they collected over 100 petitions asking state Rep. Chuck Brannan to bring the bill to the floor for a vote. When the rally concluded, some of the rally attendees went to Brannan’s office to personally deliver the petitions, never expecting that the results of their day-long effort would wind up in the trashcan within 30 minutes.

“We met at the State Capitol to voice our issues with legislators on not advancing Second Amendment rights,” Valdes recalled. “At the end of this event, GOA and FLGR had collected petitions. One of the petitions was directed to Rep. Chuck Brannan, who is the committee chair of the House Criminal Justice and Public Safety Subcommittee, and that is currently where House Bill 103, the constitutional carry bill, resides. We went to his office to drop off the petitions and his legislative aide told us he had a meeting with another group and asked us what we were doing, and we stated we had petitions regarding constitutional carry that we would like to have presented to Rep. Brannan and asked if he could take them. He said ‘yes, just put them on my desk.’ Then we went to go visit other lawmakers. About 20–30 minutes later, when we finished meeting with the other lawmakers, we returned to Rep. Brannan’s office.”

When they returned, the legislative aide wasn’t there. However, someone saw that the petitions they had stacked on the desk were in the trashcan underneath it. It was then Valdes said the legislative aide “rounded the corner.” What happened from there was recorded on video by a member of FLGR.

“We asked him why they were in the trash,” Valdes continued, “and he made multiple statements, saying; he put them in there, he reviews them with Brannan, it was a mistake, he meant to put something else in the trash. He was befuddled and confused. The color literally drained from his face. He was caught and he was on the verge of tears. At no point were we aggressive. We simply asked why they were in the trash. As concerned citizens we find this offensive.”

In the video, the aide appears nervous, pacing, fidgeting, avoiding eye contact as he is encircled by people with cell phones.

“Everything that comes through … I’ve told Rep. Brannan about your concerns,” the aide stammers.

Then enters Bob White, chairman of the Republican Liberty Caucus of Florida.

“Well great. In that case, I’m sure you’ll be happy to present this induction certificate into the Oath Breakers Hall of Shame for 2022 for his position on gun rights,” White says, handing the distraught aide the framed, full-color certificate. “He took an oath of office. He raised his hand and swore that he would protect and defend the Constitution of the United States of America and now he’s refusing to schedule constitutional carry to be heard. So, he’s been inducted into the Oath Breakers Hall of Shame for 2022 by the Republican Liberty Caucus of Florida, and we will be putting this out all over social media and we will be putting out press releases. So, congratulations. Pass that on.”

“Okay,” the distraught aide replies. He is then bombarded with a torrent of questions:

“Did he instruct you to throw the petitions in the trash?”

“You did that on your own accord?”

“Why are they in the trash? You said that you review everything with him. Right?”

“Yeah, I do,” the aide answers, escaping to the other side of his desk.

“So, he must have told you to throw them away. Is that right?” someone else asks.

“That was my mistake,” the aide answers, moving back to the front of his desk. He picks up the trash can, reaching in with his other hand to fidget with the petitions. “I meant to put all the packets and stuff, but I will … I will put that in his office for you.”

The aide then takes the trashcan full of petitions into Brannan’s office. Another video, recorded by Valdes of GOA, shows the aide placing the trash can of petitions on the floor in the representative’s office and closing the door.

White noted “it’s important to remember that the representative was already in the chamber at that time because the House was in session. So, it was pretty obvious that his aide had found those petitions and instead of waiting and giving them to the representative, he just dumped them in the trash, which is absolutely appalling. You could tell he was freaked out over it because we’re standing there staring into his trashcan and he comes walking up and we start demanding to know what the deal is and why these petitions are in the trash can. He starts fumbling around and coming up with excuses. He’s agitated and nervous.”

White also clarified that the RLC is “not in any way, shape or form officially connected to the Republican Party in Florida.”

“We’re not chartered by them. We’re not approved by them. They don’t hold any control over us or what we do,” he asserted. “We act independently of them. We try to encourage our members to be members of their local Republican executive committees in order to try of influence the party. We want to try to return the party back to its Jeffersonian roots. Personal liberty, limited government, and free markets. Those are the overriding principles that drive our decision-making. We’re very active in Tallahassee. Today we are spending a lot of time working on constitutional carry because the Second Amendment fits right in with personal liberty principle we support as an organization. Constitutional carry is something we’re very supportive of. HB 103 that Anthony Sabatini introduced on the House side has gone nowhere on the House side because it’s being held up by the speaker of the Florida House, Chris Sprowls, who has basically told the chairman of the first committee to stop it.”

While Matt Collins, legislative director for Florida Gun Rights, was angered to see the aide had dumped their petitions in the trash, he is incensed “his boss” has gone back on his word and is ultimately the one standing in the way of the bill.

“The reason why this is crucial is that his boss, Chuck Brannan, is the Criminal Justice & Public Safety Subcommittee Chairman, where the constitutional carry bill, HB 103, is in committee and has been introduced and has sat in committee the entire session,” Collins asserted. “We have two weeks of the session left, and Rep. Chuck Brannan refuses to allow the bill to have a hearing and a vote. Florida Gun Rights sent out candidate surveys and for two years in a row, Brannan filled out our survey saying he supports constitutional carry.”

Also, the destruction or improper disposal of petitions may be a possible violation of public records law.

“As I have done these last two years as your representative, I pledge to use common sense, be accessible, and to listen,” reads the list of campaign promises. “I will always fight to make sure we are heard in the State Capitol! I’m not running to simply win office. I’m running to advance a hopeful, positive, uplifting conservative agenda. I want to be trusted, I want to be your friend.”

Paul Glasco is the host of Legally Armed America, a television show out of Southeast Texas and Southwest Louisiana, host of High-Capacity Podcast, and state director of Gun Owners of America in Louisiana.

After hearing about what happened in Brannan’s office, Glasco put out a quick video, reiterating his long-held belief that Americans should not put their hopes “falsely in the hands of those who are not true Second Amendment supporters, namely Republicans. Somehow along the way Republicans got graced with this magical thing that, just because they have an ‘R’ behind their name that they just happen to be pro-Constitution and pro-Second Amendment. They’re not.”

To Glasco, that the petitions were found dumped in a trashcan—face up, in plain sight of anyone who came into the room, with a takeaway food container tossed on top of them—demonstrated that “whoever ditched these didn’t care about them.

“Of course, they quizzed him on whether or not he had gotten permission or direction to throw these away, and clearly, he probably hadn’t,” Glasco concluded. However, because he believes Brannan’s aide reflects “the mood and approach” of who he works for, the aide “clearly felt like it was okay to throw these in the trash. So, whether Chuck Brannan had any hand in these winding up in the bottom of a trashcan or not, clearly, he had given off signals that made this gentleman feel like it was okay to throw them in the trash without looking at the signatures.

“In case they try to use the excuse,” that “these weren’t Brannan’s voters,” Glasco noted, “it doesn’t matter if these people were in Brannan’s district or not. When you are committee chair, everybody in the state has a voice with you, not just the people in your district. This is not good optics for them, and I will tell you it’s going to be one of those things I think a lot of people are offended by.”

Glasco said a lot of people have already reached out to him about this and he reiterates to them the message he frequently makes on his show.

“Like I said in my video, a lot of people have a tendency to automatically assume that a particular Republican is a gun rights advocate and Second Amendment supporter when very few are,” Glasco asserted. “They run on those platforms. But they follow through with very little, unless it’s an election year for them and they need a feather in their cap. This is an opportunity, and I think Brannan showed this on his side, to see their true colors. This is a good peek into how they really feel and what they’re really planning to do. I feel like Brannan has a lot of work to do to try to fix this because this is not something that’s just going to go away. He’s going to have to answer for this and make a public statement at some point.”

The Epoch Times reached out to Brannan’s office twice but received no response.