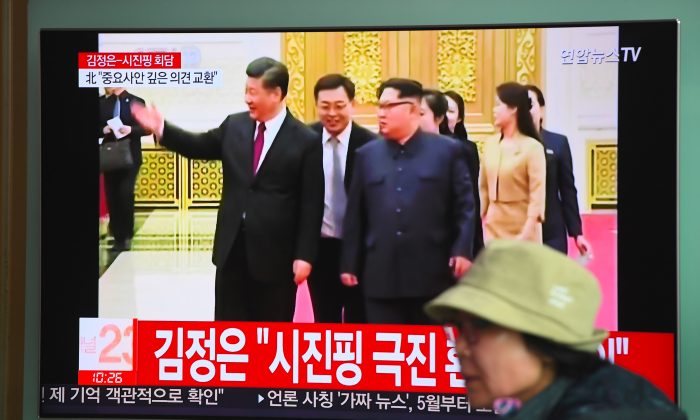 A woman walks past a television news screen reporting about a visit to China by North Korean leader Kim Jong Un, at a railway station in Seoul on March 28, 2018. During the visit, just prior to Kim’s summit with President Donald Trump, Chinese leader Xi Jinping (pictured with Kim) showered the North Korean dictator with nearly $400,000 in gifts, violating U.N. sanctions. (JUNG YEON-JE/AFP/Getty Images)
Politics

The United States has known that it has a powerful weapon that it can use to bring pressure on North Korea: placing sanctions on the Chinese banks that launder North Korea’s currency. Now a congressman is drafting legislation to do this.

Rep. Ted Yoho (R-Fla.) told the Washington Examiner that he proposes legislation that will force the administration to hold banks accountable for violating U.S. law by aiding North Korea. His effort is in its preliminary stages; he has met recently with the State Department and the House Committee on Financial Services about drafting his bill.

The Trump administration may, in the wake of Secretary of State Mike Pompeo’s most recent visit to North Korea, be ready to look at deploying tougher measures. After Pompeo left North Korea, the isolated state’s Foreign Ministry termed the talks with him “regrettable” and deplored what it called the U.S. “gangster-like mindset.”

South Korean President Moon Jae-in said, however, that North Korea’s criticism was part of its strategy and that negotiations are on the “right track.”

The United States has been reluctant to sanction Chinese banks precisely because of the potentially devastating effects of such measures.

Bloomberg reported that in the summer of 2017, the United States considered sanctioning two of China’s biggest banks for their role in laundering North Korea’s money, but decided against doing so because “of fears that punishing lenders of that size might send shock waves through the global financial system.” Officials feared “potential systemic damage and retaliatory measures from China.”