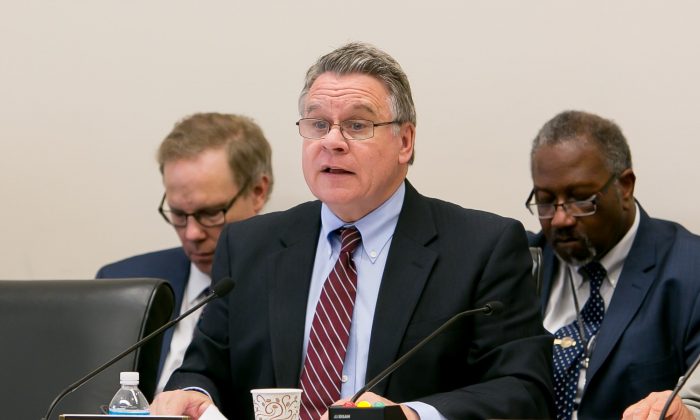 Cheung revealed that Andrew Duncan of New York donated 2,000 masks and Amanda and Johnny Ho of Freehold, New Jersey, donated the other 2,000 masks, on Friday for the Medical Center.

“Thank you to Amanda and Johnny Ho and Andrew Duncan for donating these much-needed surgical masks,” said Smith, Senior Member of the House Foreign Affairs Committee and Co-chairman of the Tom Lantos Human Rights Commission (TLHRC).

“The staff at CentraState—like other hospitals across New Jersey and across America—are working long hours at risk to themselves to protect those stricken by COVID-19,” continued Smith. “And I know that that the international Hong Kong community—who, like Americans, struggle to contain this outbreak—are our good friends. They face their own struggles with the outbreak and with China. For them to show this gesture to CentraState workers is very much appreciated.”

Smith a member and a former two-term chairman of the Congressional Executive Commission on China.

Last month Smith was honored by the HKDC in Washington for his work on the Hong Kong Human Rights and Democracy Act of 2019. The NGO is led by people from Hong Kong who currently live in the United States and support the democracy movement in Hong Kong.

“With passage of the Hong Kong Human Rights and Democracy Act, the United States Congress is making it clear that beating, torturing and jailing democracy activists is wrong,” Smith said in a press release. “We stand in solidarity with the people of Hong Kong. There will be strong sanctions, other ramifications, for this crackdown and abuse of power.”

The Representative has been an outspoken critic of the Chinese Communist Party and its human rights abuses against the those on the mainland and those living in Hong Kong.

“That is the sad and disgusting reality,” he said. “And it is what the Chinese Communist government does best—suppress, repress, torture and censor.”

On Oct. 15, 2019, the House version of The Hong Kong Human Rights and Democracy Act passed unanimously. The Senate version of the bill passed by unanimous consent on November 19, 2019.