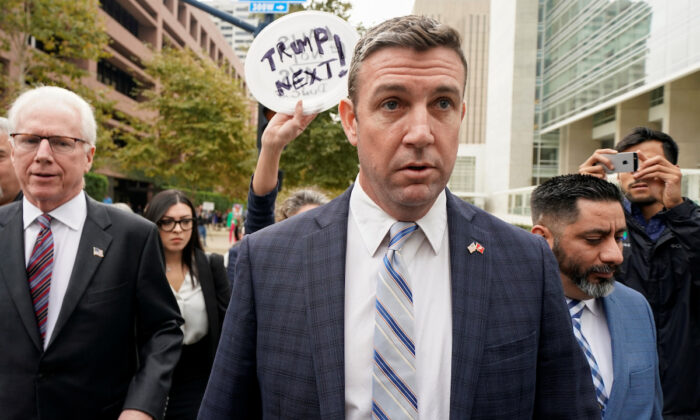 Rep. Duncan Hunter (R-Calif.) has formally resigned from Congress after he pleaded guilty to conspiracy to misuse campaign funds weeks ago, according to a letter he sent to California Gov. Gavin Newsom.

“It has been an honor to serve the people of California’s 50th District, and I greatly appreciate the trust they have put in me over the last 11 years,” Hunter concludes in the letter to Newsom. “During my time in Congress, I had the privilege of helping thousands of individuals in my district,” he said.

Hunter had previously told reporters he would leave Congress after the holiday recess.

“Shortly after the Holidays, I will resign from Congress. It has been an honor to serve the people of California’s 50th District, and I greatly appreciate the trust they have put in me over these last 11 years,” he said in a statement last month, reported local San Diego station 10 News.

Hunter pleaded guilty to one of the 60 counts against him, reported KUSI News.

“I failed to monitor and account for my campaign spending. I made mistakes, and that’s what today was all about. So, that being said, I’ll have more statements in the future about the future,” Hunter previously told NBC San Diego about the plea.

“No. 1, not a single dime of taxpayer money is involved in this. The plea that I accepted was misuse of my own campaign funds, of which I pled guilty to only one count. I think it’s important that people know that I did make mistakes,” Hunter told local media outlets at the time.

He added, “Whatever my time in custody is, I will take that hit. My only hope is that the judge does not sentence my wife to jail. I think my kids need a mom in the home.”

Despite his legal troubles, Hunter was able to get reelected.

“Hunter was the main reason the seat was at risk, and his exit improves the GOP’s odds of holding his inland San Diego seat President Trump carried 55 percent to 40 percent in 2016,” according to the website.