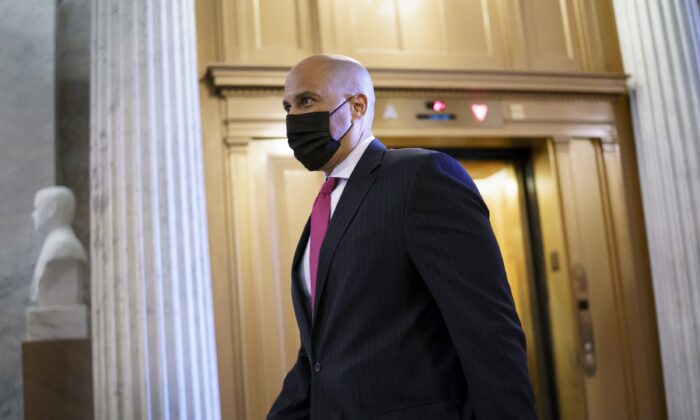 Bipartisan congressional negotiations on police reform broke down this week after months of work.

Sens. Tim Scott (R-S.C.) and Cory Booker (D-N.J.) were working with Rep. Karen Bass (D-Calif.) to try to reach a compromise on legislation that would address what they say are areas of policing that need changed. But the trio announced this week that negotiations had stalled.

“We were not making progress. In fact, recent back and forth with paper showed me that were were actually moving away from it,” Booker told reporters in Washington.

Bass blamed Republicans while Scott said Democrats were the ones who chose to halt discussions.

Bass said the team led by her and Booker “accepted significant compromises, knowing that they would be a tough sell to our community, but still believing that we would be moving the needle forward on this issue.”

“But every time, more was demanded to the point that there would be no progress made in the bill that we were left discussing,” she added.

“After months of making progress, I am deeply disappointed that Democrats have once again squandered a crucial opportunity to implement meaningful reform to make our neighborhoods safer and mend the tenuous relationship between law enforcement and communities of color. Crime will continue to increase while safety decreases, and more officers are going to walk away from the force because my negotiating partners walked away from the table,” Scott said in a separate statement.

Negotiators reached tentative agreements on key points including banning chokeholds, limiting the transfer of military equipment, and increasing funding for mental health groups. Areas where an agreement wasn’t reached included whether or not to slash funding for law enforcement, alter the types of weapons agencies receive, and stop so-called no-knock raids.

Democrats also wanted to bolster transparency for police officers, change the way women in jail are treated, and raise professional standards in law enforcement. The Department of Justice would be involved in deciding on new standards, Booker said.

Talks aren’t over, the senator told reporters, but he is turning to fellow Democrats, activists, civil rights groups, and the White House to try to hammer out legislation. He has been closely consulting with Benjamin Crump, one of the lawyers representing the family of George Floyd, who died in Minneapolis last year.

Crump has long agitated for dramatic changes to policing but has been criticized for sometimes promoting false claims about situations where police are accused of wrongdoing, including falsely claiming a girl who was shot in Ohio in April was unarmed.

The bipartisan negotiations started shortly after former Minneapolis police officer Derek Chauvin was convicted of murder in the death of Floyd. A preliminary framework was reached in June. Democrats last year blocked a police reform bill from Scott, arguing it fell short of the reforms needed.

Groups involved with the negotiations reacted to the talks breaking down.

“In a year unlike any other, when the American people spoke up, marched, and demanded reforms in policing, law enforcement unions and partisan politicians chose to stand on the wrong side of history. They have chosen to stand with those who have lynched the very people they are meant to protect and serve,” Derrick Johnson, president of the National Association for the Advancement of Colored People, said in a statement.

Patrick Yoes, president of the Fraternal Order of Police (FOP), a police union, said its officials spent countless hours working with members of Congress on drafting legislation that would “improve policing in the United States while preserving the protections so critically important to officers on the street.”

“While we are disappointed that bipartisan legislation on criminal justice reform could not be agreed upon, the FOP remains committed to working with our partners in Congress and the Administration to find opportunities to strengthen the bonds between police officers and the communities they serve,” Yoes added.

Bass called for President Joe Biden and the White House to step in now and “use the full extent of their constitutionally-mandated power to bring about meaningful police reform.”

Biden in a statement said Senate Republicans “rejected enacting modest reforms, which even the previous president had supported, while refusing to take action on key issues that many in law enforcement were willing to address.”

He said he hopes to sign a comprehensive police reform bill that honors Floyd and pointed to action his administration has already taken for federal officers, such as the restriction of chokeholds and the implementation of body cameras.

“The White House will continue to consult with the civil rights and law enforcement communities, as well as victims’ families to define a path forward, including through potential further executive actions I can take to advance our efforts to live up to the American ideal of equal justice under law,” he said.