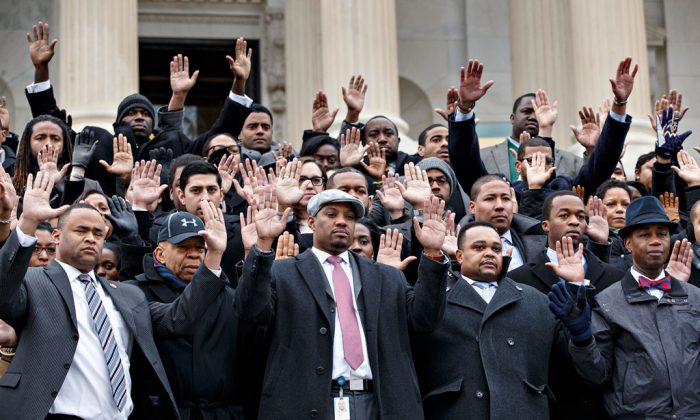 Congressional staff members to raise awareness of the recent killings of black men by police officers, both of which did not result in grand jury indictments, on Capitol Hill in Washington, on Thursday. They are joined by Rep. Elijah Cummings, D-Md., second from left. (AP Photo/J. Scott Applewhite)
US

About 200 Congressional staffers walked off the job on Thursday in a brief, coordinated protest of the recent grand jury decisions in the Eric Garner and Michael Brown cases. Numerous social media posts showed, and several media outlets reported the congressional minority staffers walked out at 3:30 p.m. and stood on the steps of the House for a few minutes.

Some who were there for the brief protest said that a few white staffers also joined.

A few members of Congress were also present. Elijah Cummings, a Democratic representative from Maryland, was among them. He posted a statement on his Facebook page, which read: “Democrats and Republicans across the country are incredibly frustrated by what happened in Ferguson, Staten Island, and elsewhere, and this protest reflects the mistrust they have in the integrity of the criminal justice system. These congressional staffers put in incredibly long hours, nights, and weekends working to pass legislation to help people live better lives, so I fully support them taking a few moments today to pray with the Senate chaplain for Congress to take action to ensure that all Americans are treated equally before the law.”

Everyone raised their hands in the air in the now-ubiquitous “don’t shoot” gesture and prayed briefly together.

Senate Chaplain Barry C. Black, who has been credited with coordinating the walkout, then led a prayer for the group as everyone bowed their heads. Afterward, Black described the action as a way for workers to exercise their right to free speech. The aim was also to contribute to a larger conversation about the issue of the killing of unarmed minorities in encounters with police.

Black is a rear admiral who retired after over 27 years of service in the Navy. He began working in the Senate on July 7, 2003. Prior to coming to Capitol Hill, he was the Chief of Navy Chaplains.

Washington, D.C. has been one of many cities across the country that has joined in protests over the grand jury decisions. Some residents there have continued to protest and call for systemic reforms.