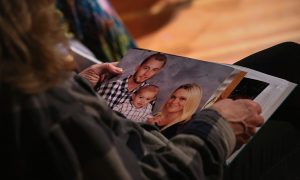 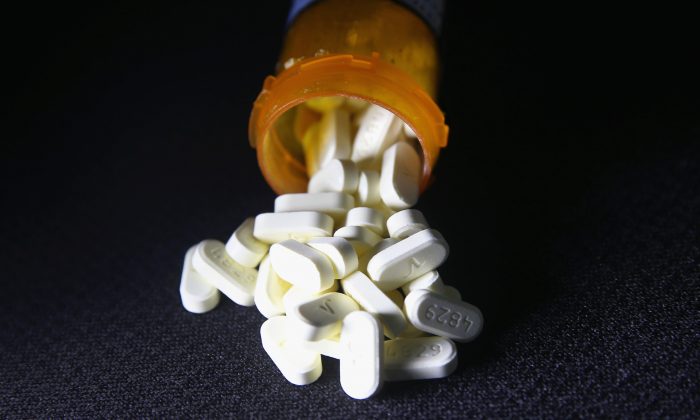 Oxycodone pain pills prescribed for a patient with chronic pain lie on display in Norwich, Conn., on March 23, 2016. (John Moore/Getty Images)
US News

Nearly nine million opioids were shipped to a single pharmacy in the small town of Kermit, West Virginia, population 406, in just two years, according to a Congressional report released on Dec. 19.

In 10 years, 20.8 million opioids were distributed to pharmacies in Williamson, with a population of 3,000 people. From 2007 and 2012, drug distributors sent a total of more than 780 million hydrocodone and oxycodone pills to West Virginia.

More of these kinds of shocking examples can be found in the result of a bi-partisan investigation by the U.S. Energy and Commerce Committee into claims of “opioid-dumping,” or shipping large quantities of opioids from wholesale drug distributors to pharmacies in rural communities.

The state is “the epicenter of the nation’s opioid epidemic and the state with the highest drug overdose death rate in the country,” according to a statement by committee chairman Greg Walden and ranking member Frank Pallone, Jr. (D-N.J.) in a press release.

The investigation, which began in May 2017, found that the sixth-largest company in the United States played a significant role in shipping massive amounts of opioids to small towns in West Virginia.

McKesson Corp. ranks 6th on the Fortune 500 list, and the company was found to have shipped an average of 9,650 hydrocodone pills a day to the Sav-Rite No. 1 pharmacy in the town of Kermit in 2007.

At a May 8, 2018 hearing, McKesson president and CEO John Hammergren said the company initially set a “reasonable monthly threshold” of 8,000 pills a month for these drugs under its Lifestyle Drug Monitoring Program. (p. 226)

The shipments of 9,650 pills per day were “36 times the threshold amount set by the Lifestyle Drug Monitoring Program,” stated the report. (page 16) “McKesson did not submit suspicious order reports to the DEA regarding orders placed by West Virginia pharmacies until August 1, 2013.”

From April 2006 to 2016, McKesson supplied almost 300 million doses of hydrocodone and oxycodone to West Virginia pharmacies.

In addition, the report called out companies AmerisourceBergen, Cardinal Health, and others for their actions.

“Our bipartisan investigation revealed systemic failures by both distributors and the DEA that contributed to—and failed to abate—the opioid crisis in West Virginia,” stated Walden and Pallone.

In a statement obtained by the Charleston Gazette-Mail, Cardinal Health said it was only an “intermediary” in the prescription drug supply chain, but the company would “continue to implement rigorous anti-diversion controls.”

AmerisourceBergen also released a statement saying, “The comparatively few examinations of AmerisourceBergen’s actions primarily focus on due diligence surrounding physicians. AmerisourceBergen has virtually no interaction with physicians and limited legal ability to gather information on their practices and prescribing behavior.”

The Gazette-Mail reported that McKesson did not respond to requests for comment.

The committee issued a number of recommendations: including that Congress should consider enacting additional suspicious order requirements; the DEA should establish a data platform with third-party experts to provide more real-time data; and distributors should perform, document, and maintain robust due diligence files for both prospective and existing customers.