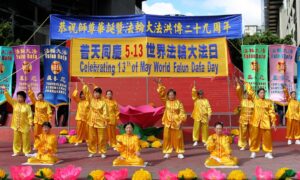 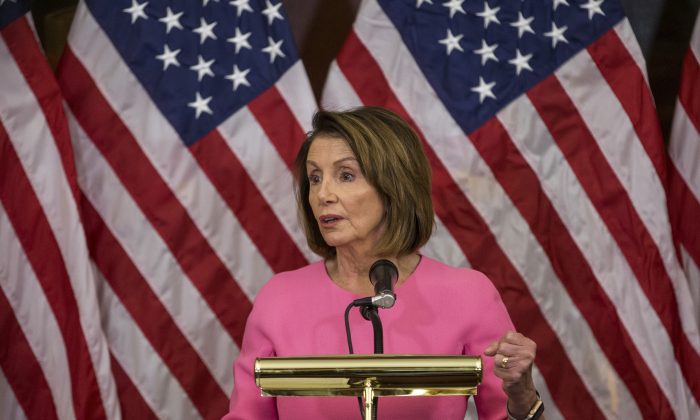 Nancy Pelosi (D-Calif.) as House Minority Leader at the Capitol Building in Washington D.C. on Nov. 7, 2018. Pelosi has recently made a deal with the Congressional Progressive Caucus to give members more positions of power in return for support in her race to become the next Speaker of the House. (Zach Gibson/Getty Images)
Viewpoints

The Congressional Progressive Caucus is by far the largest and most influential coalition in the federal government. It is also the most radical, having extensive ties to several major Marxist organizations.

Buoyed by an influx of new far-left members, the caucus has struck a deal with Democratic House leader Nancy Pelosi to significantly increase socialist power in the U.S. House of Representatives.

The quid pro quo? Support for Pelosi in her tight race to become the next speaker of the House.

“It wasn’t a coincidence that moments after Nancy Pelosi promised progressive House leaders more power in the next Congress, a host of liberal groups announced they were supporting her for speaker,” Politico recently reported.

“Rep. Pramila Jayapal, who is expected to co-chair the Progressive Caucus next year, left a Nov. 15 meeting with Pelosi in the Capitol and proclaimed that her members would have more seats on powerful committees and more influence over legislation.”

Pelosi, herself a member of the caucus before resigning to become speaker of the House in 2006, is well aware of the progressives’ growing power.

After all outstanding House races are settled, the Congressional Progressive Caucus will increase its membership from 78 to around 95 members next year—about 40 percent of the entire Democratic Caucus. Progressive Caucus leaders are using that leverage to secure influential House committee assignments.

“Thursday’s meeting with Pelosi included Jayapal and current Progressive Caucus Co-Chair Mark Pocan (D-Wis.). One request to which Pelosi agreed was to give the Progressive Caucus proportional representation on what lawmakers call the ‘A committees’: the Appropriations, Ways and Means, Energy and Commerce, Financial Services and Intelligence committees,” the Politico article continued.

The upcoming 116th Congress will bring the Progressive Caucus to the peak of its power, simultaneously increasing the influence of its allies in the U.S. communist and socialist movements.

This development must be gratifying for Sanders. As a freshman himself, he founded the caucus in 1991 with DSA member Congressman Ron Dellums (D-Calif.) and DSA/CPUSA friendly Maxine Waters (D-Calif.).

The DSA itself provided organizational help to get the caucus off the ground, according to the January/February 1998 issue of DSA publication New Ground.

“[Svart] reported developing outward relationships through [DSA member] Jose La Luz to Andrés Manuel Lopez Obrador which we can pursue if the NPC wishes, with Congressman Ro Khanna and the Progressive Caucus, in the future with Alexandria Ocasio-Cortez, and with several mainstream progressive groups at a conference on planning responses in case of a national security crisis,” the report stated.

The CPUSA also has a long history with the Progressive Caucus.

A February 2002 report by Joelle Fishman, chair of the Political Action Committee, Communist Party USA to the Party’s National Board evaluated the usefulness of the caucus.

“Although this Caucus is not large enough to control the Congressional agenda, … the existence of this group of 57 members of Congress … provides an important lever that can be used to advance workers’ issues and move the debate to the left in every Congressional District in the country,” the report stated.

A report highlighting the CPUSA’s connection to the by-now-much-larger Progressive Caucus was delivered at the 14th International Meeting of Communist and Workers’ Parties, held in Beirut, Lebanon, from Nov. 22 to 25, 2012, by the late Erwin Marquit, a then-member of the CPUSA’s International Department:

“The Communist Party USA not only welcomes the reelection of President Barack Obama, but actively engaged in the electoral campaign for his reelection and for the election of many Democratic Party congressional candidates. …

“In our electoral policy, we seek to cooperate and strengthen our relationship with the more progressive elements in Democratic Party, such as the Progressive Caucus in the U.S. Congress, a group of 76 members of the Congress co-chaired by Raul Grijalva, a Latino from Arizona, and Keith Ellison, an African American Muslim from Minnesota. …

“In its domestic policy, for example, the Progressive Caucus has put forth a program for using the public sector to deal with unemployment. It has opposed the use of the so called ‘war on terror’ to incarcerate U.S. citizens indefinitely without criminal charges. In its foreign policy, the Progressive Caucus and the Black Caucus are outspoken in their opposition to U.S. imperialist policies abroad. The Progressive Caucus, now that Obama has been reelected, will be playing an important role in contributing to the mobilization of mass activity on critical issues to bring pressure on the Congress and administration to act on them.”

Progressive Caucus leaders Raul Grijalva and Keith Ellison both have long histories with the CPUSA, along with many other prominent Caucus members including Rosa DeLauro (D-Conn.), Eddie Bernice Johnson (D-Texas), Barbara Lee (D-Calif.), Bennie Thompson (D-Miss.), and Gwen Moore (D-Wis.). Former caucus activist Nancy Pelosi herself was very tight with some CPUSA personalities at the beginning of her political career in San Francisco.

The CPUSA and DSA do not spend their time and money electing Democrats purely for love. They expect a return on their investment.

Virtually every major plank of today’s Democratic Party—from single-payer health care, amnesty for illegal aliens, normalization of relations with communist Cuba, $15 per hour minimum wage, and others—originated with the CPUSA or DSA—or from their foreign masters. It is not the slightest exaggeration to say that the communists and socialists drive Democratic Party policy formation.

With nearly 100 members—including a fresh cohort of ultra-radical recruits—coupled with unprecedented potential to influence legislative priorities thanks to Pelosi, the caucus is positioning itself to assert extraordinary power.

The Congressional Progressive Caucus is effectively part of the world communist movement. And it’s about to become the dominant faction in the Democratic Party.