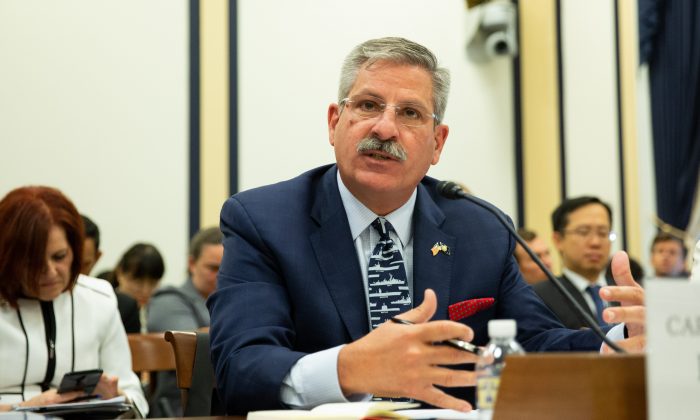 WASHINGTON—Members of Congress are pushing for a tougher response to the Chinese regime’s growing aggression. Witnesses in a Congressional hearing recommended deploying tactical nuclear weapons to Asia, showing strong support for Taiwan, and exposing human rights abuses in China as immediate steps that could curb Beijing’s drive toward global hegemony.

China’s economic rise has enabled it to expand rapidly across all domains of world power, and a growing consensus has emerged in recent years that the United States could soon be completely driven out of the Asia-Pacific region if Beijing is allowed to continue on its current course unopposed.

Such a consensus was apparent at the hearing held on May 17 by the House Permanent Select Committee on Intelligence titled “Open Hearing on China’s Worldwide Military Expansion.” In his opening statement, Chairman Devin Nunes (R-Calif.) described the hearing as part of an effort that will extend over the coming months highlighting the Chinese threat to American economic and security interests.

“The Chinese Communist Party (CCP) is engaged in a total, protracted struggle for regional and global supremacy,” said Jim Fanell, a retired U.S. Navy Captain who had nearly 30 years of experience as a naval intelligence officer studying Asia and the Chinese military.

Fanell said that Beijing is attempting to use “non-Kinetic means” to get back a wide range of territories that it perceives as belonging to China. For example, in 2012 the People’s Liberation Army (PLA) essentially invaded and occupied Scarborough Shoal without firing a shot. Before that, the disputed shoal in the South China Sea was held by the Philippines.

Dan Blumenthal, director of Asian Studies at the American Enterprise Institute, testified that the CCP regime’s aggression does not just stem from its desire to stay in power, but is an inevitable development. The CCP is “a Leninist party overseeing a continental empire that’s going to sea.”

“They constantly come at us with political warfare, information campaigns, and propaganda. We let them off the hook,” Blumenthal said. The conciliatory U.S. policy toward China in the past decades has only enabled the Chinese regime to be more aggressive, more authoritarian, and more hostile toward the United States and its allies, Blumenthal said.

Richard Fisher, a senior fellow at the International Assessment and Strategy Center, said, “The United States and its Allies may have only about a decade to prepare to deter a China well on its way to global power projection.”

The Chinese regime’s military threat, aggression, and bullying campaign against neighboring Taiwan were prominently discussed in the hearing. When asked by Nunes why Beijing has shown such “infatuation with Taiwan,” Fanell said that Taiwan is an inevitable target because of Beijing’s expansionist impulses.

“It is a visceral nationalistic design and they believe that [Taiwan] is theirs,” Fanell said.

He pointed out the democratic island nation, with which China has extensive economic exchanges and shares the same Chinese cultural heritage, poses no threat—neither economically nor militarily— toward China. But “[if] Taiwan survives as a democracy [it] undermines the legitimacy of the Chinese Communist Party,” said Fanell.

Fisher sees supporting Taiwan as key to a strategy to contain China. “The battle to hold off China starts at the Taiwan Strait,” Fisher said.

Keys to Pushing Back

Despite attributing Beijing’s aggressive rise to years of U.S. policy failure, the Congressional panel said that it is not too late to confront the ever-growing threats by the Chinese regime. But the United States needs to act fast and act now.

“The study of a competitive strategy [toward China] has to also study Chinese weaknesses because to compete effectively we have to put our strengths against their vulnerabilities,” Blumenthal said.

There are a lot of Chinese inside China who do not like what the CCP is doing, whom the United States should actively support through providing them with more information about the regime’s misdeeds, he said.

“The most decisive and efficient action the United States could take today would be to redeploy tactical nuclear weapons to our forces in Asia,” said Fisher.

Such a drastic demonstration of commitment would send a strong signal to North Korea and China that if the military balance become untenable in the future, Fisher said, the United States is ready to do “whatever it takes” to ensure allies in the region against aggression.

Blumenthal also said that the United States should make it resoundingly clear to the Chinese regime that the “use of force against Taiwan is a red line” and would definitively invite a U.S. response to defend the island nation. Such a commitment to intervene, according to Blumenthal, has not yet been made clear to the rulers in Beijing, since even American policy makers have remained ambiguous toward Taiwan, at least until recently.

Fisher said the United States needs a comprehensive long-term strategy aimed at countering the Chinese threat. “Such a strategy must include a military, economic, and ally focus, and a diplomatic, political, and informational focus,” according to Fisher.

The informational focus includes a U.S. willingness to call out Beijing when its actions suppress human rights at home and threaten countries abroad. “The Chinese people must understand that in opposing such actions of the CCP dictatorship, we are not opposing the Chinese people,” Fisher’s written statement said.