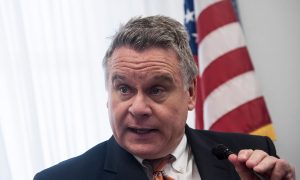 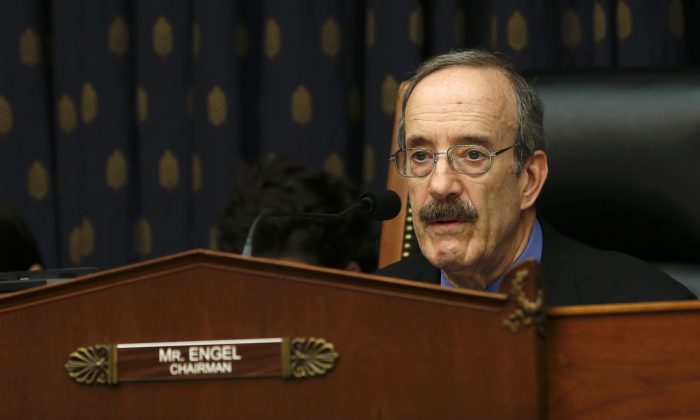 Eliot L. Engel, chair of the House Committee on Foreign Affairs, in Washington on May 8, 2019. (Jennifer Zeng/The Epoch Times)
US News

WASHINGTON—In a sign of the significance with which Congress now regards matters relating to China, more than 20 members of the House of Representatives attended a recent Committee on Foreign Affairs hearing, making statements and asking probing questions.

While part of the hearing focused on past relations, the urgent question was about how the United States should deal with today’s China.

In his opening remarks at the May 8 hearing, titled Smart Competition: Adapting U.S. Strategy Toward China at 40 Years, Chairman Eliot L. Engel (D-N.Y.) said that the United States facilitated China’s rise by allowing it to join the World Trade Organization in 2001.

That action, he said, opened the Chinese market and helped bring the country into the world economy.

“American firms and venture capital have flowed into China over the years—including in the Chinese technology market, which has become a matter of a strategic concern for our government today,” Engel said.

“The United States made a gamble that as China became more and more involved on the global stage, it would open up domestically and become a constructive stakeholder in the international system.

“It is pretty clear that gamble hasn’t paid off in the way we hoped it would.”

Engel said there’s no question that China is a determined actor that doesn’t share the United States’ fundamental values. He said he’s pleased that the Trump administration’s National Security Strategy identified China as a competitor, and Chinese global influence as a challenge that must be prioritized.

A smart competition with China should start with investment “here at home to make the United States more competitive,” he added.

Rep. Brad Sherman (D-Calif.) said that when a Roman leader made a political mistake, and was on the wrong side, he would get into a warm bath with wine and luxurious, soft music to relax and be comfortable for a wonderful hour. “We are at that hour,” Sherman said.

“We are comfortable, surrounded by luxuries and $600 billion worth of goods more than we actually produce. That’s our trade deficit. We hear the soft music of economists telling us not to worry about the trade deficit. And, in an hour, we will expire.”

Sherman said the United States is “eyeball-to-eyeball” with China.

“They think they’ll win because their political system is stronger,” he said. “They believe that if they lose a trillion dollars in GDP, and we lose a billion dollars in GDP, we will fold; that they have the unity and patriotism to persevere, and that we have division, self-interest, and no willingness to endure even the slightest pain to achieve victory.”

Sherman said the United States has to be prepared to win a trade war against China.

“We will avoid that war and win if China thinks we will win. They now think we would lose. We can’t win a trade war with China if we don’t have a plan to deal with a sharp decline in Sino-U.S. trade,” he said.

Rep. Ted Yoho (R-Fla.) said that the Chinese Communist leader thinks that the era of China has arrived, and China wants to take the world’s center stage.

“They steal intellectual property, from corn seeds to computer technology. Huawei came to my university and wanted to fund 100 percent a cyber security program,” Yoho said.

“We’re already naive, but not stupid. You know, they have an aggressive path forward, and their goal is to build five new deep-water aircraft carriers by 2030. And I bet they do. Yet, we have fed this monster—I don’t want to call them an enemy—we have fed this economy by allowing our manufacturers to go over there, and it’s time for America to wake up.”

“We need to have a policy called the ABC policy—Anywhere But China—for manufacturing. Our manufacturers need to get out of China, and go anywhere but China. We don’t want a head-on conflict with China; nobody in the world wants that. And so the only way we can counter that is economically. And if we starve the economic engine, Xi Jinping will have to turn and adapt to the policies in the world,” Yoho said.

Going on the Offensive

Aaron Friedberg, professor of politics and international affairs at Princeton University and a former deputy assistant for national security affairs in the Office of the Vice President, was one of the four expert witnesses at the hearing.

He said Americans haven’t yet achieved a consensus on the nature of the challenge imposed by the Chinese Communist Party (CCP) rulers.

“After a prolonged period of collective denial, we’ve finally started to acknowledge the existence of some very troubling symptoms. But we haven’t yet reached agreement on a diagnosis of their cause, nor on a prescription for treating them,” Friedberg said.

“It is vital that we do so, and preferably sooner rather than later,” he said.

Friedberg agrees that the United States’ “gamble” with China hasn’t paid off.

“China has clearly become far richer and stronger, but instead of loosening its grip, the CCP regime has become even more repressive and more militantly nationalistic. Instead of evolving toward a truly market-based economy, Beijing continues to deploy state-directed, market-distorting, mercantilist policies. Meanwhile, China’s external behavior has become more assertive, and in certain respects, aggressive.”

Friedberg said that the CCP has three strategic objectives: “First and foremost, to preserve the power of the CCP. Second, to restore China to what the regime sees as its proper, historic status as the preponderant power in eastern Eurasia. Third, to become a truly global player, with power, presence, and influence on par with, and, eventually, superior to that of the United States.”

“One reason they are pressing so hard now is that they see a window of opportunity that may not stay open forever.”

Apart from weakening democratic institutions in African nations and other parts of the global South, the CCP also seeks to exploit and widen divisions within the West, Friedberg said.

He proposed three measures to counter the CCP: First, to work with friends and allies; second, to figure out “exactly where and to what extent we should seek to disentangle or decouple our economies from China’s.”

“Third and finally: We cannot afford to remain entirely on the defensive in our evolving competition with China. We need to find ways to illuminate the brutal and corrupt character of the CCP regime, and to impose costs on it for its egregious and harmful behavior, both at home and abroad.”

Elizabeth Economy, senior fellow and director for Asia studies at the Council on Foreign Relations, said in her testimony that “The U.S.-China relationship has entered a new, increasingly contentious period that is marked more by overt confrontation and competition than by coordination and cooperation.”

She noted that the CCP now has eyes everywhere, with as many as 200 million surveillance cameras contributing to control of the Chinese population; and Beijing is now also applying its tools of social control to foreign enterprises and citizens.

In addition, a “virtual wall” was created to limit the influence of foreign ideas and capital inside China, while the CCP seeks to project its own values, priorities, and policies globally to expand its political, economic, and security influence and power.

Economy said the United States must move beyond its more reactive and defensive strategy, to adopt a plan that reflects a more profound and sustainable path to effective competition with China.