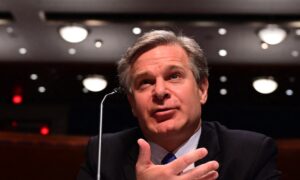 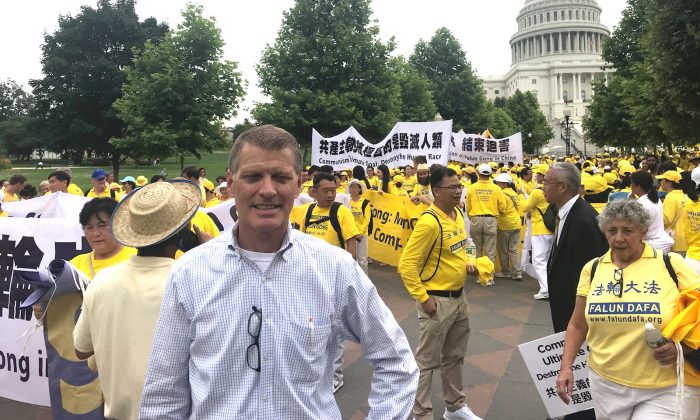 Brian Witt, a candidate for California’s 27th congressional district, at a rally calling for an end to the persecution of Falun Gong in China, on the West Lawn of the Capitol on June 20, 2018. (Sophia Fang/The Epoch Times)
US News

WASHINGTON—When Brian Witt, a candidate for a California congressional seat, heard on June 19 about the Falun Gong rally and march to be held the next day on Capitol Hill, he boarded a red-eye flight from LAX at midnight and arrived in Washington on the morning of June 20, ready to take part.

Witt, who had no prior experience in politics, was inspired by the presidential candidacy of Bernie Sanders and decided to run as a Democratic candidate for California’s 27th congressional district. He wants to stand up for the working class and small-business owners. Successful in the June 5 primary, he faces incumbent Judy Chu in the general election in November.

Witt is also a supporter of the human rights of Falun Gong practitioners.

He booked himself on the last flight out of Los Angeles, but a miles-long traffic jam had him scrambling to make the flight. On his arrival at Dallas-Fort Worth for his connecting flight, he only barely got on before the door closed.

Yet, upon his arrival at Capitol Hill, Witt, who hadn’t slept, looked energized.

When he arrived at the rally, he saw the more than 5,000 Falun Gong practitioners dressed in their trademark yellow t-shirts filling the West Lawn of the Capitol. Several congressmen and heads of NGOs took to the podium to call for an end to the persecution of Falun Gong by the Chinese communist regime.

“[Yesterday,] when I got an email from a friend about this, I said I wanted to be there,” Witt said. “I’m happy to be here to share this event with all the practitioners.”

“What we see here is quite a lot of organization, which is quite positive, and it’s organized very peacefully,” Witt said. “When I watch the practitioners walking through the street in silence, it has a very powerful impact.”

Witt sees parallels between the Chinese communist regime and the Nazis before and during World War II.

“The Nazis were committing atrocities and genocide, and I believe the Chinese Communist Party is doing the same thing,” Witt said.

The world stood by and did nothing in the face of the Nazis’ crimes, and “in a couple of years, the whole world was in flames.”

Witt thinks the good people of the world need to stand up and oppose genocide. That is what compelled him to board that red-eye to Washington.

“These folks [Falun Gong practitioners in China] are having their organs harvested, stolen, sometimes while still alive,” Witt said.

“This is one of the most horrific things I’ve ever heard about. I couldn’t believe it.

“I believe that those who are responsible for this should be apprehended and turned over to the International Criminal Court for prosecution.”

According to several investigative reports, the Chinese regime uses Falun Gong practitioners as the primary source for the organs used in its large transplantation industry.

In order to harvest the organs with optimal freshness, they are taken while the victim is still alive, killing the victim.

Witt believes the media have not done their job in reporting on organ harvesting in China.

“I couldn’t believe our own mainstream media does not report on this [organ harvesting crime],” he said.

“We have publications like The New York Times, which is a fact-based publication. They do good journalism. However, I feel they lie by omission.

“What we want to do is to encourage our media folks to make sure that they deliver all of the facts—not just those that are convenient, or the policy that they support.”

At the end of the march, the Falun Gong practitioners gathered at the large lawn by the Washington Monument to practice meditation.

“Just by watching them standing here in silence, the calm way in which everyone presents themselves, I feel that they are displaying their pure humanity. This is what we should all be striving for,” Witt said.

“I want to see the U.S. return to a leadership role in promoting human rights around the world. This is another example of tyranny at work, what’s happening in China. We have the financial leverage to make this stop.”

Witt feels an obligation, as a candidate for Congress, to do something.

“I want to make sure that we get the story out,” he said. “If I am elected, we will continue to pressure the Chinese Communist Party to cease this practice.”