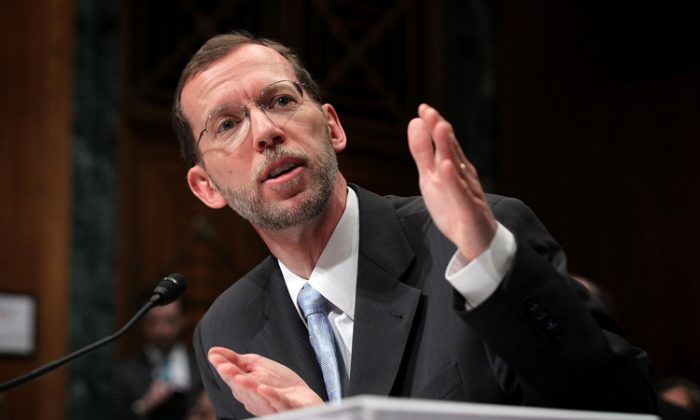 Director of the Congressional Budget Office Douglas Elmendorf testifies during a hearing before the Senate Budget Committee Feb. 2 on Capitol Hill in Washington, D.C. According to the CBO report, the U.S. economic recovery will continue to be sluggish until 2018. (Alex Wong/Getty Images)
Business

The Congressional Budget Office (CBO) releases its 10-year Budget and Economic Outlook during the first month of every year. There was no exception in 2012, as the CBO released its outlook on Jan. 31, followed by the testimony of economist Douglas W. Elmendorf, director at the CBO, to the Committee on the Budget in the U.S. Senate on Feb. 2.

Elmendorf gave a rather gloomy forecast on the U.S. economy, suggesting that the United States’s unprecedented high budget deficit is closely connected to the U.S. economic health and will not improve significantly until the economy rebounds.

“How much and how quickly the deficit declines will depend in part on how well the economy does over the next few years. Probably more critical, though, will be the fiscal policy choices made by lawmakers,” Elmendorf testified.

Statisticians suggest that depending on the statistics that were used, the projected outcome could differ significantly. Concerning the deficit, the numbers provided to the public are net figures and do not include the gross federal debt.

“The sad fact is that statistics are ridiculously easy to manipulate. … There are literally hundreds of ways to manipulate statistics,” according to an article about statistical manipulation on the Effective Meetings website.

The gross federal debt increases substantially more than the amount of the deficit each year. That is because a considerable amount of federal borrowing is not counted in the budget.

The gross federal debt is the entire debt the U.S. federal government has accumulated, including IOUs for approximately $2.6 trillion at mid-2011, which are owed to the Social Security Trust Fund.

Government-sponsored enterprises (GSE), including the Federal Home Loan Mortgage Corp. (Freddie Mac) and two off-budget agencies, the Social Security Trust Fund and the U.S. Postal Service, are not included in the federal budget and thus are not part of the budget deficit. Yet, they have the full faith and credit guarantee of the United States and in the case of the U.S. Postal Service, Freddie Mac, and Fannie Mae, hit the United States with an enormous debt.

The debt by Freddie Mac, Fannie Mae, and the Postal Service “exposes the taxpayers to losses, but it is not accounted for as government debt. As the Federal Reserve carefully notes in its ‘Flow of Funds’ report, non-budget agency and GSE debt is not ‘considered officially to be part of the total debt of the federal government,'” according to an article on the American website.

“The federal budget deficit—although starting to shrink—remains very large by historical standards,” said Elmendorf in his testimony, published on the CBO website.

“The pace of the economic recovery has been slow since the recession ended in June 2009, and the Congressional Budget Office (CBO) expects that, under current laws governing taxes and spending, the economy will continue to grow at a sluggish pace over the next two years,” according to the CBO report.

The U.S. economic recovery will continue to be sluggish and is predicted not to improve significantly until 2018.

The CBO predicts that the unemployment rate will not subside significantly during this and next year, hovering around 8 percent and then 7 percent for the years 2014 and 2015.