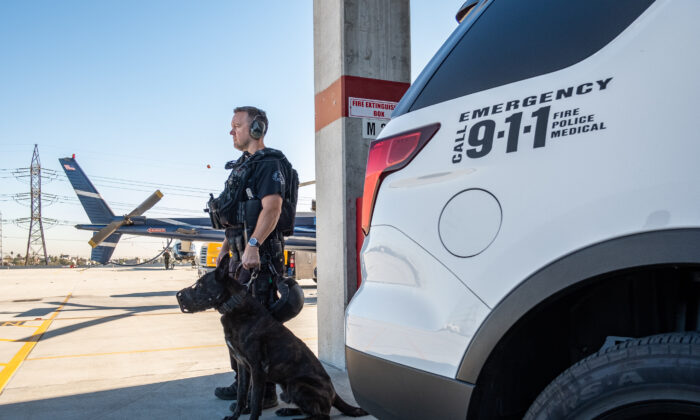 A congressional bill was introduced on Jan. 14 to assist local law enforcement agencies by hiring more police officers and increasing their salaries.

“Our local law enforcement officers put themselves in harm’s way each day to keep our communities safe, and the COPS grant program directly funds the training, hiring and salaries of many police departments,” Rep. Young Kim (R-Calif.), one of the representatives introducing the bill, said in a statement.

The bill comes amid a police officer shortage, according to San Francisco police Sgt. Richard Cibotti.

San Francisco police Sgt. Richard Cibotti said that movements such as “Defund the Police” and the media vilifying officers have made it difficult for agencies, including his own, to gain new recruits, saying it had an “irreparable” impact on his department.

“We have both a retention and a recruiting problem,” Cibotti told The Epoch Times. “There was a study that was put out about a year and a half ago, where they said [the department] should be up around 2,300 police officers in the city based on San Francisco’s population growth. But [if you take] just cops in the city, we’re pretty low, right around 1,700.”

Cibotti said that the number of cops is only ever increased by recruiting, yet classes that are budgeted for 55 officers per class are now only filled with about 20 officers.

“So we’re losing five to 10 [officers] a month, only replacing with 20 people in a new class every four to five months depending on how our schedule of training goes, and that doesn’t even really include the retirements and people that are coming up to retire.”

In Cibotti’s department, 120 officers have left in the past year and a half.

“It’s quite a large change in 18 months, and the amount of people we’ve lost due to Defund the Police [movement, and a number still] have plans to leave, who we’re probably not going to be able to retain, it’s going to create a real problem with numbers and how many people we have as a department going forward,” Cibotti said.

“We’re going to have a real hard time just staffing the police department in general. You’re going to see very few police officers on the street. … So as that continues, you’ll see less and less police officers, and you’ll start seeing more and more crime, and that’s urban decay if nothing changes.”

The COPS program is a component of the U.S. Department of Justice responsible for advancing the practice of community policing across the country.

The bill would expand access to grants for law enforcement agencies in rural areas, allow grants to be used to increase officer wages in low-income communities, and create a COPS office within the U.S. Department of Justice.

The bill would also require the U.S. Government Accountability Office to file a report to determine how well law enforcement agencies represent their communities, the percentage of officers that live in the jurisdiction they serve, average pay compared to jurisdiction cost of living, and ways to improve these data points.

Orange County Sheriff Don Barnes said in a statement, “Providing resources to local law enforcement for hiring and training is one of the best ways to ensure a continued high level of professionalism and integrity amongst the men and women who wear the badge in service to their community.”