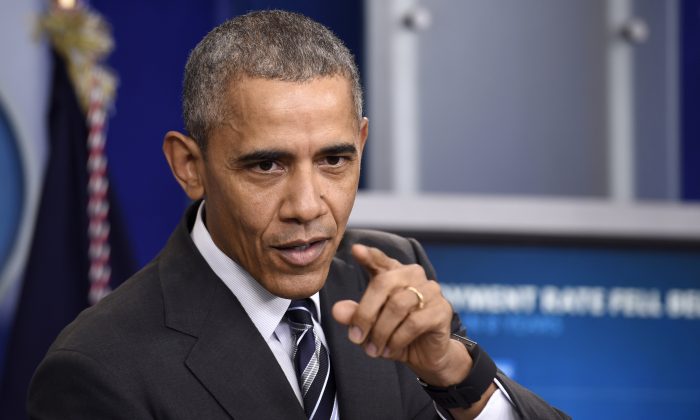 President Barack Obama speaks about the economy at a news conference in the Brady Press Briefing Room of the White House in Washington, D.C., on Feb. 5, 2016. (AP Photo/Susan Walsh)
Politics

WASHINGTON—President Barack Obama said Saturday that he will ask the Republican-led Congress to double spending on research and development into clean energy by 2020. But the request is unlikely to be fulfilled.

GOP lawmakers scoff at the science behind climate change and dismiss Obama’s pleas for the issue to be dealt with urgently. In an unusual twist in Obama’s final year in office, the Republican leaders of the House and Senate budget committees have said they will not hold a customary hearing on the president’s budget proposal the day after they receive it.

Obama on Tuesday plans to send to Congress the spending blueprint for the budget year that begins Oct. 1. The release will come on the day when New Hampshire voters get their say in the first presidential primary of the 2016 race to succeed him.

“Rather than subsidize the past, we should invest in the future,” Obama said in his weekly radio and Internet address, outlining his wish for the increased spending.

Rather than subsidize the past, we should invest in the future.
— Barack Obama, president, U.S.

Federal spending on research and development of clean energy would jump from $6.4 billion this year to $12.8 billion by 2020 under Obama’s proposal, administration officials said.

Spending would increase by about 15 percent in each of the five years of the pledge. If approved, the budget that takes effect Oct. 1 would provide $7.7 billion for clean energy research and development across 12 federal departments and agencies for the 2017 fiscal year.

Obama’s proposal is part of an initiative he announced at last year’s U.N. climate conference in Paris.

Some 20 countries, including the U.S., China, India and Brazil, have committed to double their respective budgets for this type of research over five years.

The White House said this past week that Obama wants oil companies to pay a $10 fee on every barrel of oil to help raise money for spending on clean transportation to combat climate change. House Speaker Paul Ryan, R-Wis., immediately declared the president’s proposed oil tax “dead on arrival.”