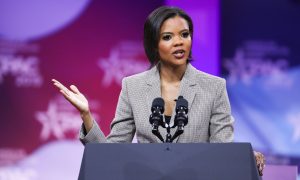 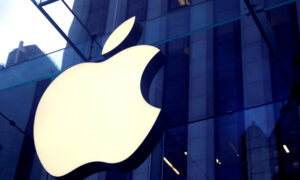 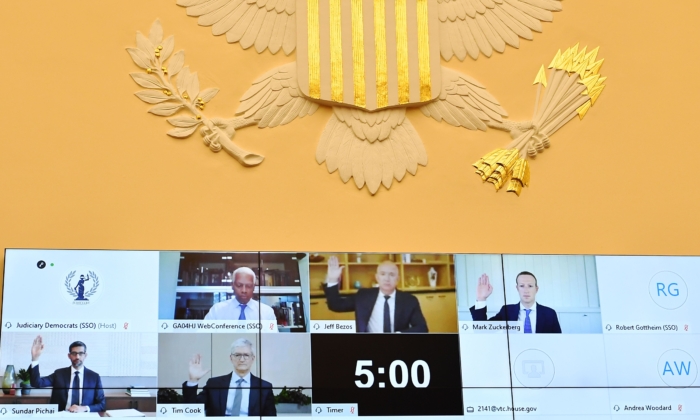 The men heading four of the largest tech companies in the world faced hours of questioning from lawmakers on Capitol Hill on July 29 as part of an investigation into whether their companies have grown too powerful.

The chief executive officers from Apple, Google, Amazon, and Facebook defended their company practices, although the format of the hearing allowed little time for substantive discussion on a range of complex issues.

The hearing capped a yearlong congressional investigation into big tech’s alleged anti-competitive tactics and stifling of innovation, among other issues. Lawmakers sought to determine whether decades-old antitrust laws should be revised to address the realities of the digital age, which the four companies dominate.

“When the American people confronted monopolists in the past—be it the railroads and oil tycoons or AT&T and Microsoft—we took action to ensure no private corporation controls our economy or our democracy,” Rep. David Cicilline (D-R.I.) said in his opening statement. “We face similar challenges today.”

The congressional investigation is one of several inquiries into the tech firms’ practices. The Trump administration, federal regulators, and the Justice Department are looking into the four companies’ businesses. In September last year, the attorneys general in 50 states and territories opened an antitrust probe of Google’s advertising business. Apple is facing scrutiny in the European Union over its App Store practices.

The scrutiny intensified on July 29 after President Donald Trump said he would take matters in his own hands if Congress fails to deliver a legislative solution.

“If Congress doesn’t bring fairness to Big Tech, which they should have done years ago, I will do it myself with Executive Orders. In Washington, it has been ALL TALK and NO ACTION for years, and the people of our Country are sick and tired of it!” the president wrote on Twitter.

The July 29 hearing marked the first congressional appearance of Jeff Bezos, the CEO of Amazon and the world’s richest man. In opening remarks, he underlined his humble roots as the son of a single mother in high school.

Bezos countered the concerns by pointing out that the company faces intense competition, including from companies that have adopted its successful third-party marketplace platform. There are now 1.7 million small and medium-sized businesses selling on Amazon’s marketplace around the world, he said.

Bezos devoted a substantial portion of his speech to the collateral benefits of Amazon’s growth and wealth, including profits for the shareholders, large-scale innovation, and charitable works.

“More than 80% of Amazon shares are owned by outsiders, and over the last 26 years—starting from zero—we’ve created more than $1 trillion of wealth for those outside shareholders. Who are those shareowners? They are pension funds: fire, police, and school teacher pension funds,” Bezos said in written testimony.

In its bipartisan investigation, the Judiciary subcommittee collected testimony from mid-level executives of the four firms, competitors, and legal experts, and pored over more than a million internal documents from the companies.

Cicilline has called the four companies monopolies, although he says breaking them up should be a last resort. He also said that in the wake of the COVID-19 pandemic, “these giants stand to profit” and become even more powerful as millions shift more of their work and commerce online.

Mark Zuckerberg, the CEO of Facebook, is faced with questions that range beyond the topic of market competition. His platform’s role as a place to share views and ideas has become the target of conservatives, who say they are singled out for censorship. Recently released undercover videos by investigative journalism outfit Project Veritas show Facebook moderators saying they delete everything conservative and pro-Trump.

“Big Tech is out to get conservatives,” said Rep. Jim Jordan (R-Ohio).

In the meantime, the company is under pressure from liberals to delete so-called “hate speech” and information on controversial topics.

“We believe in values—democracy, competition, inclusion, and free expression—that the American economy was built on,” Zuckerberg said in written testimony.

“Ultimately, I believe companies shouldn’t be making so many judgments about important issues like harmful content, privacy, and election integrity on their own,” he added. “That’s why I’ve called for a more active role for governments and regulators, and updated rules for the internet.”

Zuckerberg has said Facebook aims to allow as much free expression as possible unless it causes imminent risk of specific harm or damage.

European regulators have concluded that Google manipulated its search engine to gain an unfair advantage over other online shopping sites in the e-commerce market, and fined Google, whose parent is Alphabet Inc., a record $2.7 billion. Google has disputed the findings and is appealing.

“Google operates in highly competitive and dynamic global markets, in which prices are free or falling, and products are constantly improving,” Alphabet CEO Sundar Pichai said in his written testimony. “Competition in ads—from Twitter, Instagram, Pinterest, Comcast, and others—has helped lower online advertising costs by 40% over the last 10 years, with these savings passed down to consumers through lower prices.”

Apple, whose iPhone is the third-largest seller in the world, faces EU investigations over the fees charged by its App Store. Rep. Hank Johnson (D-Ga.) said lawmakers have learned over the course of the investigation that Apple doesn’t share its criteria for approval for the app store and that the rules are “arbitrarily interpreted and enforced.”

“We have open and transparent rules,” Cook said. “Those rules apply evenly to everyone.”

Apple’s App Store opened with 500 apps and has grown to 1.7 million today, according to Cook. The App Store business supports more than 1.9 million American jobs, he said.