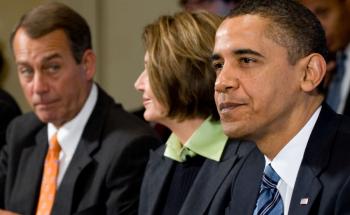 Senate Minority Leader Senator John Boehner (L) of Ohio sits with President Obama and Speaker of the House Nancy Pelosi during a meeting with members of Congress in the Cabinet Room of the White House Dec. 9. On the same day, Boehner criticized Democrats (Saul Loeb/AFP/Getty)
US

The omnibus spending bill—a 2,500 page, $1.1 trillion bill dealing mostly with spending increases in domestic programs and organizational budgets—passed the House by a vote of 221-202.

The vote split along party lines: 221 Democrats voted for it, while 28 Democrats and all Republicans voting against, according to an AP report.

The Senate then voted to suspend health care debate and address the budget. The process is expected to continue through the weekend.

The omnibus bill—which is reported to contain nearly 5,000 “earmarks”—came under fire from Republican House Minority Leader John Boehner, who criticized what he called excessive spending by Democrats.

“We’re broke. America’s broke,” said Rep. Boehner on the floor of the House. “All year long, our friends on the other side of the aisle have been on a massive spending spree that our nation can’t afford.

“It’s our kids and grandkids who are going to pay for it, and yet we can’t find ways to cut spending.”

Rep. Boehner also called on the president to “go through this bill line-by-line and page-by-page, all 2,500 pages of it” in an effort to whittle down what Republicans see as excessive spending.

Rep. Boehner was referring to a pledge made by Barack Obama at the first presidential debate, when he stated that as president, he would “go line by line to make sure that we are not spending money unwisely.”

The vote to put health care on temporary hold came during debate on an amendment to allow importation of prescription drugs from select countries, a bipartisan amendment sponsored by Senators Byron Dorgan (D-N.D.) and John McCain (R-AZ).

The two senators have championed the issue in past legislation, and addressed it again Wednesday in a proposed amendment to health care reform legislation—this just a day after Food and Drug Administration (FDA) Commissioner Margaret Hamburg expressed reservations over the amendment due to “resource intensive” challenges overseeing the program, and importation safety concerns.

“This amendment provides the resources for them,” countered Sen. Dorgan. “The people that are selling [the imported drugs] will pay a fee.”

The amendment allows importation of prescription drugs from select countries—such as Canada, Ireland, and others— that have comparable standards for and ability to trace custody of pharmaceuticals.

A challenge for President Obama's administration is the deal made with pharmaceutical companies to support his health care reform agenda—and the billions these companies have spent to demonstrate their support.

“We should not pursue policies that could expose Americans to substandard drug products and potentially weaken the Food and Drug Administration (FDA) by crippling the agency’s ability to fulfill its mission in protecting public health and safety,” reads a statement on PhRMA.org, a Web site for pharmaceutical lobbyists PhRMA.