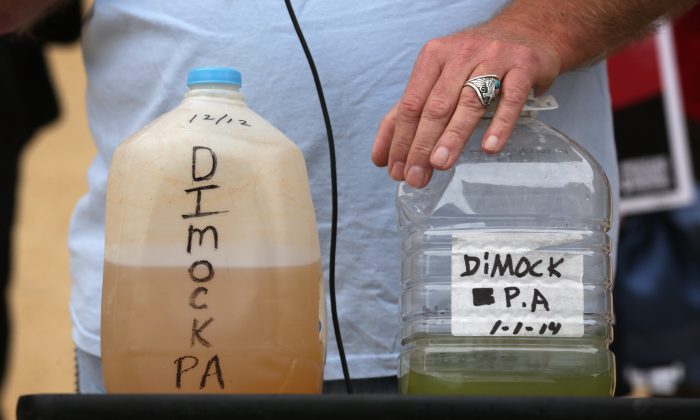 Last month, the Senate voted for the first time on closing a dangerous loophole in the Clean Water and Safe Drinking Water Acts. The “Halliburton loophole” allows oil and gas drillers to inject hazardous chemicals into the ground during fracking operations—without revealing the content of their chemical cocktail. The vote failed 35–63.

This comes at a time when evidence of health and environmental damage caused by fracking is growing.

The United States is amid an unprecedented drilling boom, spurred by hydraulic fracturing, which uses pressurized water, sand, and a secret mix of chemicals to shatter shale bedrock, releasing deep-earth natural gas and oil deposits.

Some 15 million Americans now live within a mile of these operations, which are fast transforming America’s pristine rural landscapes into industrialized, polluted, scarred drilling zones.

The False Promise of Fracking and Local Jobs

The Concerned Health Professionals of New York said there is “no evidence that fracking can be practiced in a manner that does not threaten human health.”

While the fracking industry claims groundwater is unaffected, these companies are acutely aware that wells routinely leak. Schlumberger, one of the world’s largest frack firms, estimated in 2003 that 5 percent of wells leak immediately, while 60 percent leak within 30 years.

In January, 4 million gallons of brine, oil, and frack residue leaked in Marmon, S.D., contaminating the Missouri River. It’s a common occurrence. In 2012, companies self-reported 15.6 million gallons of spilled oil, fracking fluid, wastewater, and other liquids—an underestimate since some states don’t log the size of accidents.

It takes up to 5 million gallons of fresh water to frack a single well. About one-third of this water/chemical/sand mix flows back to the surface, bringing along heavy metals like lead and arsenic. Some of that toxic wastewater is injected into deep storage wells—causing earthquakes in Ohio, Oklahoma, and Texas—or is treated and recycled for crop irrigation.

With so many chemicals involved, it’s impossible for conventional water treatment plants to adequately clean it. Truckers sometimes illegally dump it on roads, in woods or streams—which prompted a recent congressional investigation. This month, another investigation found that untold amounts of fracking and drilling wastewater has been illegally injected into California’s aquifers at 170 sites—3 billion gallons were dumped into just nine disposal wells.

Treating patients exposed to drilling chemicals is nearly impossible since the Halliburton loophole prevents anyone from identifying which chemicals they’ve been exposed to. When families are sickened and sue, industry settlements include non-disclosure agreements that prohibit them from discussing their experiences.

These gag orders, in combination with industry secrecy and government inaction continue to shackle scientific study of fracking and limit public awareness. Release of EPA’s in-depth fracking report has been delayed until 2016, even as increasing numbers of doctors and scientists urgently call for comprehensive studies of health impacts and long-term risks.

Since its inception, the fracking industry has skirted federal clean water laws. It’s time Congress closed the Halliburton loophole, EPA released data on fracking’s health and ecological harm, and that we, as a nation, made energy choices that don’t further harm our planet—or our health.

Sharon Guynup is co-author of “Tigers Forever: Saving the World’s Most Endangered Big Cat” and is a frequent Blue Ridge Press contributor. © www.blueridgepress.com 2015.