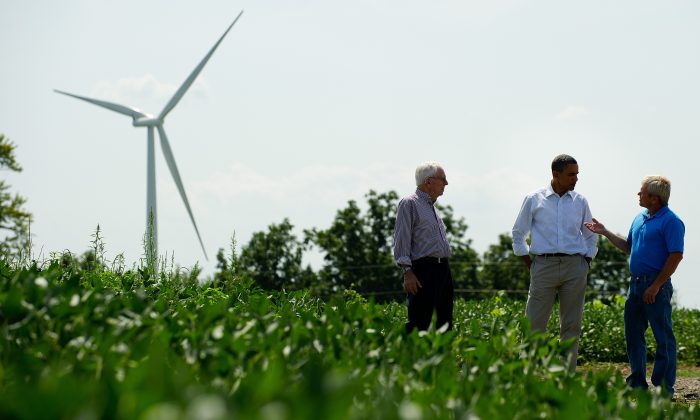 Congress passed the wind production tax credit (PTC) more than two decades ago to spur development in an industry still in its infancy. The wind sector has since matured into adulthood, prompting thousands of turbine farms to sprout in fields across the country.

The credit, worth 2.3 cents per kilowatt hour of wind electricity produced, expired at the end of 2013 but is being considered for renewal as part of a package of tax breaks that passed the House last Wednesday and is expected to pass the Senate before Christmas. But before that happens, the PTC deserves a critical re-evaluation. And the results don’t look good.

When they passed it in 1992, lawmakers had hoped the credit would create a robust domestic wind infrastructure and allow the renewable resource to chip away at fossil fuel’s mammoth share of U.S. energy production. The hope was that the industry could eventually thrive without the subsidy.

The PTC provided incentives that contributed to the development of roughly 58,000 megawatts of wind electricity. But recent evidence shows that those additional megawatts were merely a response to an overzealous subsidy environment, rather than real-world improvements in wind efficiency and cost reductions.

Since the PTC’s latest expiration last year, the growth in wind power has plummeted, from 13,128 megawatts of added capacity in 2012 to only 1,255 megawatts of additional electricity so far this year. Similar drops have occurred during the several previous lapses in the PTC, lending credence to the idea that wind’s rise has been born entirely from heavy subsidies.

The words of Warren Buffett, whose Berkshire Hathaway has invested billions of dollars in wind farms, speak for themselves: “[W]e get a tax credit if we build a lot of wind farms. That’s the only reason to build them. They don’t make sense without the tax credit.”

There’s a good reason the growth in wind capacity has fallen to pre-PTC levels: the cost to install a new wind farm has not dropped as significantly as lawmakers had hoped. They intended the credit to ignite a rapid push for innovation in the wind sector, driving down production and installation costs.

Instead, we’ve witnessed little change in wind installation prices, with costs in the late 2000s actually rising above those experienced a decade earlier. These numbers reflect how a significant subsidy has failed to make wind power a competitive market option.

So what’s the harm in keeping the PTC if it has managed at a minimum to increase the total amount of electricity generated by wind power? Isn’t any progress away from fossil fuel consumption a good thing? Not necessarily.

The subsidy that has encouraged Warren Buffett and others to invest in wind turbines comes with significant opportunity cost. In other words, the tens of billions of dollars that have been diverted toward building new wind facilities over the past two decades could have been spent on more promising technologies such as tidal power, cellulosic ethanol, or even more efficient battery storage systems.

But why would an energy company bother investing in other technologies when it can collect a tax credit that equals one-third of the average cost of producing electricity to power homes and offices? Which then allows them to sell its power output at a loss of $35 per megawatt hour and still turn a profit?

The answer is they won’t, and the losers are many: taxpayers, other renewable energy developers, and the environment. Keep in mind—the examples of potentially better uses of all those tax credits are not necessarily economically efficient solutions either (nor are they the only alternative options). But they are unlikely to be explored as long as power companies can game the wind subsidy system.

The PTC turns a weak technology into a riskless bet, encouraging energy companies to spend their limited renewable budgets on subsidy farming rather than the best prospective solutions. The major players in the U.S. wind industry will continue their efforts of subsidy seeking in the coming weeks as they try to convince lawmakers to revive the credit. That makes now a good time to re-examine the original intent of the PTC and to ask if it has made any progress in accomplishing its goals.

The policy has not fostered wind technology improvements. The PTC has only encouraged companies to install wind turbines rather than more promising energy sources. The credit was arguably a misguided policy back in 1992, but with two decades of paltry results, it is safe to say that the wind production tax credit can now officially be deemed a policy failure.

Arthur Wardle, a student research associate at Strata, contributed to this article. Randy Simmons is a professor of political economy at Utah State University. This article previously published on TheConversation.com.