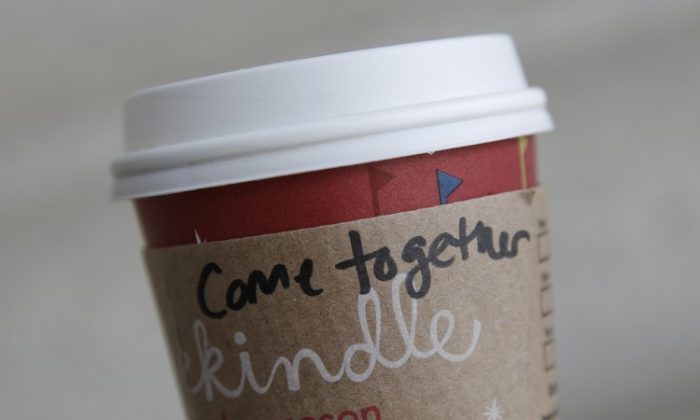 A cup of coffee with the words "come together" at the Union Station Starbucks on Dec. 27, 2012, in Washington, D.C. Starbucks CEO Howard Schultz said that the words are meant for lawmakers, referring to the divisive negotiations over the "fiscal cliff." (Drew Angerer/Getty Images)
US

House Minority Whip Steny Hoyer (D-Md.) said, “If you have ten problems, one is still worth solving,” speaking on Congress possibly passing legislation to avert Dec. 31 tax increases for individuals with annual incomes up to $200,000.

At a Dec. 27 press conference broadcast on C-Span, Hoyer said that voting on that one issue could “show the country that Congress can work.”

“We have four days,” said Hoyer.

The nickname of “fiscal cliff” is dire, but the actual effects of going over the legislative cliff would be both gradual and correctable—in most cases.

One exception is Emergency Unemployment Compensation (EUC), extended unemployment insurance, which would end abruptly for the long-term unemployed. It is due to stop Dec. 29.

States with unemployment above a certain level are now receiving federal money to cover unemployment for long-term jobless people. Millions of people could lose the small stipend, according to Hoyer.

The nonpartisan Congressional Budget Office (CBO) issued a report in November titled, “Unemployment Insurance in the Wake of the Recent Recession.” According to The Hill congressional newspaper, “[The report] found that extending the unemployment program through next year would create 300,000 jobs and boost economic growth by 0.2 percent in the fourth quarter of 2013.”

Republican legislators, however, have not welcomed the idea. They are concerned about domestic spending adding to the federal deficit.

Senate Budget Committee ranking member Jeff Sessions (R-Ala.) wrote a Dec. 3 letter to his colleagues advising them to make sure to offset extended unemployment funding with other spending cuts. He wrote that President Barack Obama’s budget proposals would add $9 trillion to the deficit overall. Renewing the extended unemployment insurance would cost $26 billion, according to Sessions.

Sen. Scott Brown (R-Mass.) tweeted, “Getting on place to DC to review plan from Pres. We will see. Better late than never.” Later that day, the White House announced that the president will not send a plan to Capitol Hill, CNN reported.

The two parties created the legislation nicknamed the “fiscal cliff” when they were unable to agree on proposals from the nonpartisan “Gang of Six,” a group of legislators who tried to craft a solution to the federal deficit and the country’s economic problems.

Unless legislators pass a new bill within four days, tax cuts temporarily set during George W. Bush’s presidency will end. Payroll taxes will rise for all workers. Spending cuts to military and domestic programs will begin.

Treasury Secretary Timothy Geithner sent a letter to Congress on Dec. 26 in which he warned that the country is about to reach its debt ceiling: “I am writing to inform you that the statutory debt limit will be reached on December 31, 2012, and to notify you that the Treasury Department will shortly begin taking certain extraordinary measures authorized by law to temporarily postpone the date that the United States would otherwise default on its legal obligations.”

America’s credit rating has been downgraded twice this year over debt-ceiling deadlock.

Hoyer observed that the impasse has disgusted the American people. He compared congressional inability to compromise to a parent taking his own child hostage.

The House will convene on Sunday to try to reach an agreement.