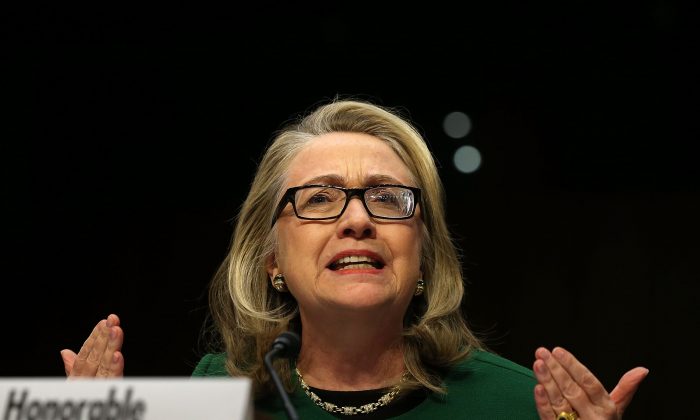 Secretary of State Hillary Clinton testifies about the Benghazi Sept. 11, 2012 attacks on Capitol Hill on Jan. 23, 2013. Lawmakers questioned Clinton about the security failures that led to the death of four Americans, including U.S. Ambassador Christopher Stevens. (Alex Wong/Getty Images)
US

The House Committee on Benghazi recently issued a subpoena for all of Hillary Clinton’s emails during her tenure as secretary of state that were related to Libya. However, the committee itself doesn’t have the authority to subpoena private property, issuing the legal request instead as a political gesture to put public pressure on Clinton to voluntarily hand over her emails.

“One of them is public pressure,” said Rep. Trey Gowdy (R-S.C.) on Fox News Sunday. “If the public believes that it is reasonable for her to turn over that server which contains public information to a neutrally detached arbiter, then she’ll be forced to do so.”

The Benghazi Committee, which Gowdy chairs, issued a subpoena on Clinton’s emails days after it was revealed to the public that she had exclusively used a private email account during her tenure as secretary of state. Clinton has turned over more than 30,000 emails to the State Department to comply with the Federal Records Act, but many suspect that more work-related emails remain hidden on her server.

Her email was set up on the homemade clintonemail.com server, which has also raised security concerns over its vulnerability to hacking.

Gowdy said that ideally, Clinton would turn over access of her email server to neutral third-party such as “a retired judge or archivist” to determine which emails were work related and which emails were private, but did not rule out the possibility of the House issuing a binding subpoena for access to Clinton’s email server.

“The House as an institution may be forced to go to court to try to get access to that,” Gowdy said. “The House has no business looking at purely personal e-mails, but by the same token, she doesn’t get to decide what is purely personal and what is public.”

Clinton’s office has rejected the suggestion of a neutral third-party winnowing her email archive, saying that the Federal Records Act “puts the obligation on the government official, not the agency or a third party, to determine what is and is not a federal record.”

In the likelihood that Congress does successful gain access to Clinton’s email servers, the records will almost certainly be irretrievable. Clinton has stated that all 31,380 “personal emails” have already been deleted, as she had “no reason to save them.” Data experts say that deleted emails can still be salvaged if their location hasn’t been overwritten with new data, but subpoenas can takes months, if not years, to complete.

“I hope it doesn’t get to that point. It’s an open legal question, and any time you litigate something, you’re talking about years and years,” Gowdy said.

On the legal front, the State Department has already received multiple challenges in the wake of Clinton’s email scandal. Last week, the Associated Press filed a lawsuit against the Department seeking access to Clinton’s emails, and Gawker Media filed a Freedom of Information Act complaint to gain access to the email archives of a top Clinton aide.