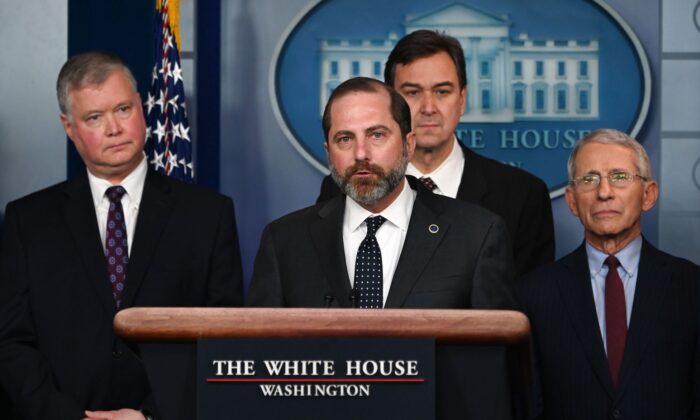 Secretary of Health and Human Services Alex Azar takes questions during a briefing with members of the president's Coronavirus Task Force in Washington on Jan. 31, 2020. (Andrew Caballero-Reynolds/AFP via Getty Images)
AMERICA

Since the beginning of 2020, the coronavirus has spread to 38 countries and is showing no signs of slowing down. For this reason, Congress has been prompted to act to get as much information about the United States’ ability to respond to a potential spread of the virus on its soil.

Due to the rapidly evolving epidemic, it is essential the United States’ response remains well-coordinated and flexible. Health and Human Services Secretary Alex Azar declared a public health emergency, prompting other U.S. agencies to respond.

On Wednesday, the House Energy and Commerce Health Subcommittee held a hearing on COVID-19. Five Republican members and five Democratic members asked questions about the Health and Human Services Department’s response to this outbreak.

Azar told lawmakers that the total supplemental funding needed would be $2.5 billion to cover expenses that the administration believes are appropriate for 2020 and would go through the end of the fiscal year. Part of the supplemental request is funding for state and local government efforts.

Chairwoman Anna Eshoo (D-Calif.) questioned the Trump administration’s budget cuts from other public health areas, such as the $200 million in cuts to the Biomedical Advanced Research and Development Authority, $700 million in cuts at the Centers for Disease Control and Prevention, and $3 billion from the National Institutes for Health. She asked if the administration would be willing to reconsider these cuts.

The secretary said that the cuts would not impact functioning to those areas.

Azar described how the agency is using a pandemic influenza plan as a guide in preparing for a response to the current coronavirus outbreak.

“I was one of the architects of the original pandemic plans back in the Bush administration,” Azar said. “That work is foundational, it’s definite, that’s what set up our entire state, local, and federal program, any type of viral outbreak like this.”

“Innovation is vitally important, that’s why two of the key legs of the supplemental request are to develop vaccines and therapeutics for this novel virus.”

Azar said that in the event of a community outbreak, they would not quarantine whole towns and cities because that only creates more panic and people find ways to leave, spreading the virus. Instead, they would use “community-based litigation steps and social distancing.”

When questioned about the development of anti-microbial medications, Azar said: “We’ve supported development of 16 novel antibacterial projects, I believe three have actually come to market. What we’re finding, though, is there’s a market failure question here, where you’re basically asking a company to develop a drug, but then not to have it used much.”

Referring to the drug stockpile of active pharmaceutical ingredients companies have available Hahn said, “We’ve received no reports of shortages and found no shortages and prescription drugs coming from China, and we have discussed this with manufacturers and private companies and adequate supplies currently exist.”

Congressman Michael Burgess (R-Texas) said the coronavirus spread should motivate the United States to bring manufacturing back home, reducing reliance on other countries for these important medicines.

Burgess asked Robert R. Redfield, Director at the Centers for Disease Control and Prevention, if he was satisfied with China’s sharing of information and the World Health Organization report about the spread of the virus in China.

Without going into any detail Redfield said, “There’s good scientific interaction between us.”

Congressmembers also asked about the chain of command in the decision-making process for coronavirus emergency response. Specifically, who gives permission for an infected American citizen to reenter the United States.

“If it’s in a foreign country, the ambassador of the president is the final word on representing the United States,” said Azar.

As far as the United States’ capacity to test for the virus, Redfield confirmed there are 12 CDC labs that can test for the coronavirus. Redfield said they are currently working to expand that number significantly.

Anthony S. Fauci, Director of the National Institute for Allergy and Infectious Diseases at the National Institute for Health, said they are at phase one in development for a vaccine, which takes months because it needs to be first tested on animals and then a few dozen humans. Phase two will need $140 million and take six months to a year to test 1,000 patients, and then after it has been finalized, the CDC will work with private drug companies to manufacture the vaccine. From start to finish, the development of a vaccine could take 12 to 18 months.

Health officials know that this virus is highly transmissible, but are still studying how long an infected person can transmit the virus and how it spreads.

Redfield said: “That’s something that’s still up in the air and the way you get the answer to that is you try and isolate. We know that there are individuals who are actually able to transmit when they are without symptoms.”

The CDC issued a statement on Tuesday saying it’s not a matter of if but when we will see the rise of coronavirus cases in the United States.

Azar concluded his testimony by reiterating that there’s no change to anyone’s daily life from this, that the country has pandemic plans. “There’s a playbook for this,” he said. “And we’re executing against that but we have to be realistic and transparent that we will have more cases.”

Burgess said in a statement prior to the hearing that he hopes to get information about the level of preparedness. “It is my hope that by delaying the onset of the virus in the United States, we have enhanced our preparedness activities and our communities will be ready.”

U.S. health agencies are working together to protect the American people from the outbreak. So far, they have been successful in curbing infections in the United States because of coordination efforts between the Centers for Disease Control and Prevention, Food and Drug Administration, and state and local public health officials.