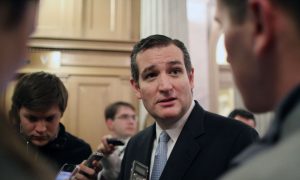 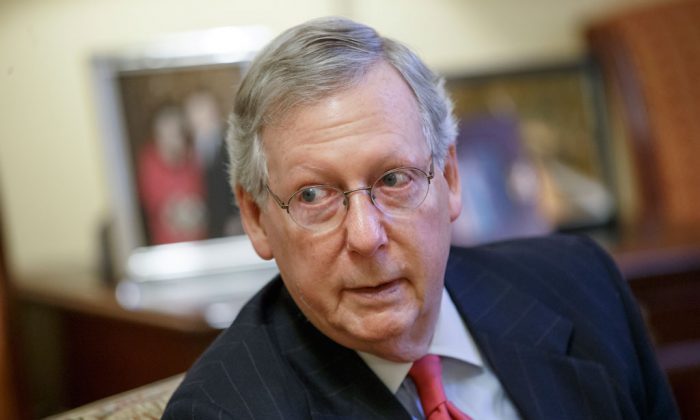 Incoming Senate Majority Leader Mitch McConnell (R-Ky.), during an interview with The Associated Press at the Capitol in Washington, Wednesday, Dec. 17, 2014. "How many times did we have the point of the week?" Senate Minority Leader Mitch McConnell (R-Ky.) said about Democratic tactics in an interview with AP last week. "It was designed to make us walk the plank. It had nothing to do with getting a legislative outcome." (AP Photo/J. Scott Applewhite)
Politics

WASHINGTON—The 113th Congress began its turbulent life two years ago battling over whether to help Superstorm Sandy victims. They did, eventually.

By the time Congress limped out of town last week, one of its last acts was to honor the 100th anniversary of the extinction of passenger pigeons.

In between were mostly modest achievements overshadowed by partisan gridlock, investigations and sharp clashes capped by a government shutdown.

If productivity is measured by laws enacted, this Congress one was near the bottom.

Congressional and White House data showed that President Barack Obama signed 296 bills into law as of Friday, the second lowest total, by just 13 measures, for any two-year Congress in records dating to the 1940s.

Each party accused the other of scuttling bills for political purposes ahead of November’s elections, which gave Republicans firm control of the House and Senate in 2015.

Leaving the Capitol last week, outgoing Senate Majority Leader Harry Reid, D-Nev., lamented that lawmakers should have achieved more, “but that’s what we got.”

Republicans contended that Democrats forced blatantly political votes on issues from the minimum wage to pay equity that had no chance of passing.

Such tactics were “designed to make us walk the plank. It had nothing to do with getting a legislative outcome,” Senate Minority Leader Mitch McConnell, R-Ky., said in an interview with The Associated Press last week.

Revamping the immigration system, tightening gun buyers’ background checks, forcing work to begin on the Keystone XL oil pipeline — they all foundered as the Republican-run House and Democratic-led Senate checkmated each other’s priorities.

Across-the-board spending cuts designed to be so painful that they would force the two parties to negotiate deficit reduction took effect anyway, attempts to overhaul the tax code went nowhere, and each chamber passed a budget that the other ignored.

It became one of this Congress’ hallmarks.

On the last day, the Democratic-controlled Senate confirmed a dozen of Obama’s judicial appointees and sent the White House legislation extending tax breaks for working-class people and special interests alike.

But an 11th-hour attempt to renew a federal program helping cover the cost of losses from terrorism was derailed by retiring Sen. Tom Coburn, R-Okla., who called it a giveaway to the insurance industry.

While Obama signed scores of bills into law last week, they were mostly minor. One honored golfer Jack Nicklaus with a Congressional Gold Medal for his “excellence and good sportsmanship.”

Through two years, the bar for accomplishments dipped so low that routine functions such as averting a federal default and keeping government agencies open seemed like crowning achievements.

As if to underscore the turmoil around him, Senate Chaplain Barry Black opened one session last year by praying, “Rise up, O God, and save us from ourselves.”

Republicans led investigations of the Internal Revenue Service’s mistreatment of conservative groups and the deadly 2012 attacks on Americans in Benghazi, Libya. Both parties decried poor medical care by the Department of Veterans Affairs.

Before leaving, Congress approved legislation financing federal agencies through September, but not without revolts in both parties. Conservatives bolted because the bill did not halt Obama’s executive actions deferring deportations of millions of immigrants in the U.S. illegally. Liberals rebelled against its eased restrictions on banks and big political donors.

Other accomplishments included a modest budget deal that capped spending and rolled back some government-wide cuts. Lawmakers provided $60 billion for victims of Superstorm Sandy, passed a farm bill and eased flood insurance costs for homeowners.

The House voted more than 50 times to kill or weaken Obama’s 2010 health care overhaul, a law that is perhaps his proudest achievement. It voted to block the administration from curbing carbon emissions from coal-fired plants and protecting streams and wetlands from pollution, to deport many immigrants who are in the U.S. illegally and to ban abortions after 20 weeks of pregnancy.

None of these bills cleared the Senate.

Reid snubbed Obama’s bid for legislation speeding Congress’ work on trade treaties, refusing to bring it up in the face of union opposition.

Sen. Ted Cruz, R-Texas, was a repeated source of headaches for GOP leaders.

The tea party freshman kept the Senate in session overnight in September 2013, saying Republicans should demand repeal of Obama’s health care law as the price for averting a government shutdown.

GOP leaders opposed that ultimatum but conservatives agreed with Cruz, and most federal agencies closed. It took 16 days for Republicans to relent.

From The Associated Press. AP writer Donna Cassata contributed to this report.