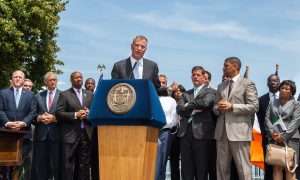 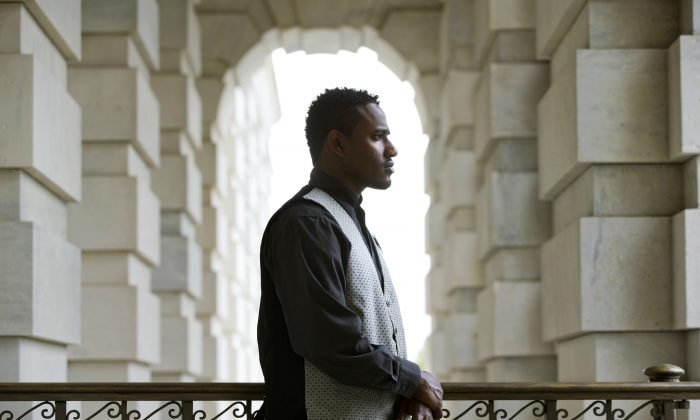 In this photo taken on Friday, May 1, 2015, Abraham Tesfahun, 21, who works in food service at the Senate and makes $10.70 an hour, poses for a portrait at the Capitol in Washington. Income inequality is more than a political sound bite to workers in the Capitol. It's their life. Many of the Capitol's food servers, who make the meals, bus the tables and run the cash registers in the restaurants and carryouts that serve lawmakers, earn less than $11 an hour. Some make nothing at all when Congress is in recess. (AP Photo/Jacquelyn Martin)
US

WASHINGTON—Income inequality is more than a political sound bite to workers in the Capitol. It’s their life.

Many of the Capitol’s food servers, who make the meals, bus the tables and run the cash registers in the restaurants and carryouts that serve lawmakers, earn less than $11 an hour. Some make nothing at all when Congress is in recess.

Members of the House and Senate collect their $174,000 annual salaries whether Congress is making laws, taking a break or causing a partial government shutdown.

“This is the most important building in the world,” said Sontia Bailey, who works the cash register and stocks the shelves at the “Refectory” takeout on the Capitol’s Senate side. “You’d think our wages would be better.”

Bailey, 34, makes $10.33 an hour, a hair above the $10.10 hourly minimum for federal contractors. She had to move from her apartment to a rented room when the 2013 temporary government shutdown interrupted her income, she said.

KFC pays her better. Bailey works weekends and two evenings a week there, making $12 an hour.

In the Capitol food service world, she said, “everybody has second jobs.”

Down an ornate hallway is 21-year-old Abraham Tesfahun. He serves lunch in the Senate members’ dining room and handles the afternoon cash register in the busy Senate takeout, one floor below. Tesfahun said his hourly pay is $10.30. But he receives an additional $3 an hour in cash, which otherwise would go toward health insurance. He is covered by his mother’s insurance policy under President Barack Obama’s health care law.

That doesn’t mean Tesfahun, who emigrated from Ethiopia as a teenager, is tight with his mom.

“She kind of kicked me out of the house,” he said sheepishly, when he quit community college after one year to work seven days a week. Now, he said, he rents a basement room and works full time in the Capitol. On Saturdays and Sundays, he works at a Dunkin’ Donuts, for $8 an hour. That’s above the federal minimum wage of $7.25, although some states have higher minimums.

“People are much nicer” in the Capitol, Tesfahun said. But he said he generally has no work or pay when Congress is out of session, and he sometimes collects unemployment benefits. The Senate is scheduled to be in recess 13 weeks this year.

Both Bailey and Tesfahun said they once received a pay raise of 3 cents an hour.

In Congress and the 2016 presidential race, candidates in both parties promise to help U.S. workers narrow the gap with high earners. The Capitol’s food workers — many of whom can’t afford cars, let alone vacations — are prime examples of people without college degrees who have fallen far behind in the high-tech global economy.

Capitol food workers with at least seven years’ experience fare better than Bailey and Tesfahun, making about $16 or $17 an hour. But even one of those, cook Shawnee Ellis, said she does catering on the side because “I have to make extra money” to pay her bills.

All work for Restaurant Associates, a major New York-based contractor that handles food services for the House and Senate.

In a statement, the contractor said it “takes pride in paying above-market competitive wages.” It would not comment on individual employees.

The House privatized its food operations decades ago. The Senate ran its own operations, at heavy losses, until 2008. That’s when the then-Democratic majority said taxpayer subsidies were unsustainable, and Restaurant Associates won the contract to take over.

“There are parts of government that can be run like a business and should be run like businesses,” said Sen. Dianne Feinstein, D-Calif., then the head of the Senate Rules Committee, which oversees such contracts.

A few Democrats objected. “You cannot stand on the Senate floor and condemn the privatization of workers, and then turn around and privatize the workers here in the Senate and leave them out on their own,” Sen. Bob Menendez of New Jersey said at the time.

Nonetheless, senators approved the 2008 switch in a voice vote, which any dissenter could have blocked. Through a spokesman, Feinstein declined to comment for this story.

Capitol employees’ struggles are causing discomfort for lawmakers — including some running for president — as national debate churns over income inequality. In April, dozens of Capitol workers staged a one-day protest.

Senate cook Bertrand Olotara wrote in The Guardian, “I serve food to some of the most powerful people on Earth.” They often talk of expanded opportunity for workers, he wrote, but “most don’t seem to notice or care that workers in their own building are struggling to survive.”

The Washington region is among the nation’s most expensive.

After The Washington Post, CNN and others profiled Charles Gladden, a Senate food worker who is homeless, several Democratic senators urged Republican leaders — now in the majority — to press Restaurant Associates to increase workers’ pay. GOP Sen. Roy Blunt of Missouri, who leads the Rules Committee, said “their concerns will be kept in mind as the contract comes up for renegotiation” later this year.

The House contract with Restaurant Associates expires in August; requests for bids went out last fall. Congressional officials say the House and Senate food-service contracts do not specify the hourly rates for workers.

At a hearing last week, Rep. Debbie Wasserman Schultz of Florida, the national Democratic Party leader, called on the House to choose contractors who pay workers a “living wage” according to local economic standards. Her amendment failed.

“It’s really not within the scope of this committee nor subcommittee to micromanage all contracts,” said Rep. Tom Graves, R-Ga.