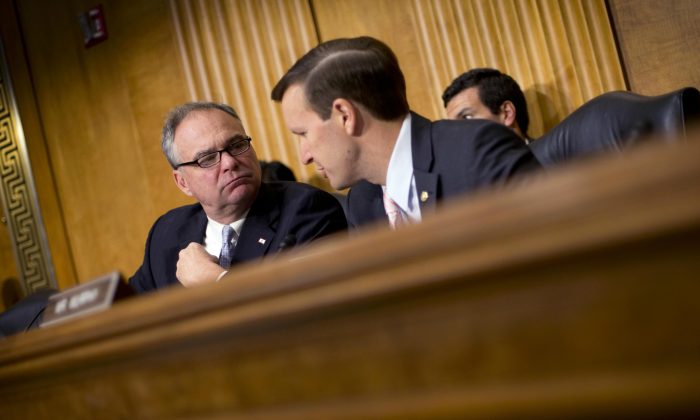 Senate Foreign Relations Committee members, Sen. Tim Kaine (D-Va.) (L) and Sen. Christopher Murphy (D-Conn.), participate in a committee hearing on Capitol Hill in Washington, D.C., on July 9, 2014. In the fight against the Islamic State group, members of Congress talk tough on extremism, but most want nothing to do with voting to legally authorize the military campaign, preferring to let the president take ownership of the mission. (AP Photo/Pablo Martinez Monsivais)
Politics

Congress Dodging War Powers Despite US Mission in Syria

WASHINGTON—In the fight against the Islamic State (ISIS), members of Congress talk tough against extremism, but many want to run for cover when it comes to voting on new war powers to fight the militants, preferring to let the president own the battle.

They might not be able to run for long.

The U.S. military intervention in Iraq and Syria is creeping forward, putting more pressure on Congress to vote on a new Authorization for the Use of Military Force. It would be the first war vote in Congress in 13 years.

Sen. Tim Kaine (D-Va.), a leading force in the Senate for a new authorization, said the reluctance to vote runs deep and that many in Congress prefer to criticize President Barack Obama’s policy in Iraq and Syria without either authorizing or stopping the fight.

“There is sort of this belief that if we do not vote, we cannot be held politically accountable. We can just blame the president,” Kaine said.

“We are forcing people to be deployed far from home in a theater of war, and risking their lives and losing their lives and members of Congress are like ‘I’m afraid of this vote because somebody might try to hold me accountable for it.'”

The vote in 2002 to authorize the invasion of Iraq was politically perilous for many lawmakers—and is shadowing 2016 presidential candidates today.

“I know lawmakers who still go over to Arlington Cemetery—to the gravesites of folks killed in the Iraq War and wonder ‘Why did I vote for this?'” Kaine said.

Fellow Democrat Sen. Chris Murphy of Connecticut agreed, saying crafting a plan to fight ISIS isn’t easy. “It’s very convenient for Congress just to force the president to do it and blame him if it fails,” Murphy said. “If we pass an AUMF, then we own the strategy.”

Since August 2014, the U.S.-led coalition has conducted nearly 8,000 airstrikes in Iraq and Syria. There are 3,400 U.S. military personnel currently deployed to Iraq. More than $4.7 billion has been spent so far in fighting ISIS. The exodus of refugees from Syria has intensified and Russia has entered the conflict.

“I think we are seeing an example of mission creep right now,” said Rep. Tom Cole (R-Okla.), who signed the letter calling for a new AUMF. “I think we should go ahead. We are gradually ceding over our war-making authority to the president. Big mistake. No matter which side you are on, you ought to want Congress to do this. And you ought to be able to hold your member accountable for how they ultimately vote.”

On Friday, a bipartisan group of 35 House members called on new Speaker Paul Ryan to schedule and debate on a war authorization as quickly as possible in light of the United States’ “deepening entanglement in Syria and Iraq.”

Sen. Bob Corker (R-Tenn.), chairman of the Foreign Relations Committee, has asked the Obama administration to brief committee members as early as next week on the legal justifications for recent deployments to Syria and elsewhere.

Generally, conservatives want Congress to approve broad authorities for the president to fight ISIS militants with no limits on ground troops. They say banning U.S. combat troops or restricting the fight to just Iraq and Syria only emboldens the militants, who would seek safe haven elsewhere. Other lawmakers want to give the president authority to train and equip local forces and conduct airstrikes but not launch a combat mission on the ground.

In February, the administration proposed a three-year authorization to fight ISIS, unrestricted by national borders. The fight could be extended to any “closely related successor entity” to the ISIS extremists, but the measure did not authorize large-scale ground operations.

Sen. John McCain (R-Ariz.), chairman of the Armed Services Committee, said Obama’s proposal was “nonsense” because the White House knew it would get no real support on Capitol Hill. “He just throws something over the transom and says ‘Hey, good luck guys.’ He’s not serious.”

After Obama sent over his draft of a new AUMF, 30 members of the House asked former Speaker John Boehner to bring it up for debate and a vote. Instead, Boehner suggested the president rip it up and start over.

“Congress only has itself to blame,” said Rep. Adam Schiff (D-Calif.). “The administration offered a draft that Congress didn’t like, but Congress can amend it.”