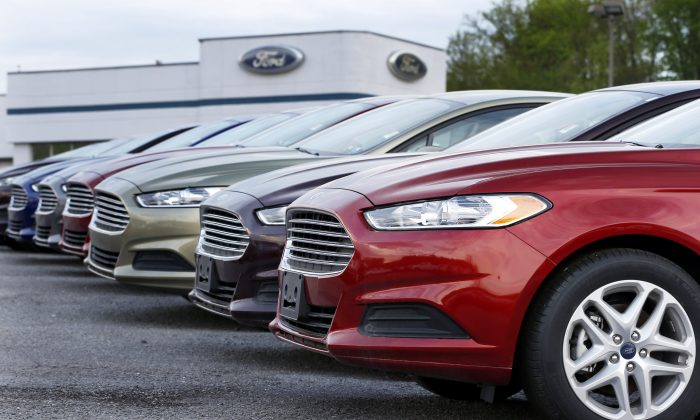 In this May 8, 2013, photo, a row of new 2013 Ford Fusions are on display at an automobile dealership in Zelienople, Pa. As the auto industry strives to sustain its post-recession comeback, car companies are resorting to tactics that some experts warn will lead to trouble down the road. (AP Photo/Keith Srakocic)
News

An article saying Congress has approved a bill that allows welfare recipients to get a free car is fake.

The bogus article was posted on Empire News, a self-described satirical website.

It reads: “Yesterday the White House announced its plan to offer free motor vehicles to welfare recipients, after congress passed the bill in a narrow vote. The program, initiated by President Barrack Obama, is very similar to what is now widely known to the public as ‘The Obama Phone,’ where welfare recipients can get free cell phone service through a subsidized program. Some are even already referring to the free vehicle program as ‘The Obama Car.'”

According to a disclaimer, Empire News is fake and shouldn’t be taken seriously.

“Empire News is a satirical and entertainment website. We only use invented names in all our stories, except in cases when public figures are being satirized. Any other use of real names is accidental and coincidental,” the website says.

The article had tens of thousands of shares this week, with many people posting comments on it on social media sites.

One person wrote: “Not all people who get assistance are worthless some DO work the economy is a [expletive]!! Close minded idiots disgust me :-/ a”

Added another: “Guess maybe we should all quit working, so that we can get a free card and free gas and free food.. What the.”

Added another: “This is part of the problem, people believe this and spread it around like it is the truth.”