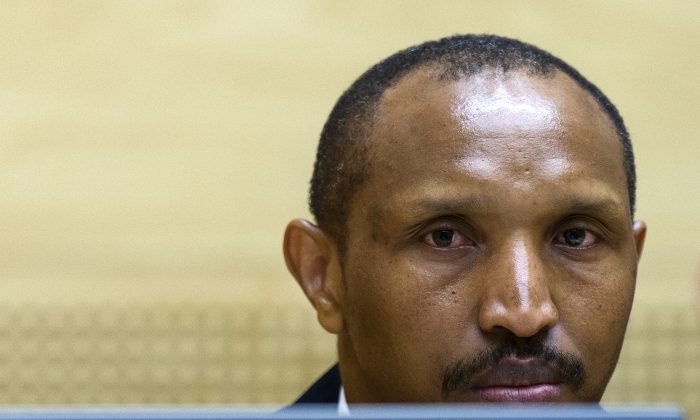 Bosco Ntaganda, a Congo militia leader known as The Terminator, waits for the start of his trial at the International Criminal Court on charges including murder, rape and sexual slavery allegedly committed in the eastern Ituri region of Congo from 2002-2003, in The Hague, Netherlands, Wednesday, Sept. 2, 2015. (Michael Kooren/Pool Photo via AP)
Africa

THE HAGUE, Netherlands—A Congo militia leader known as The Terminator pleaded innocent Wednesday to 18 charges, including murder, rape and sexual slavery, as his long-awaited trial started at the International Criminal Court.

Bosco Ntaganda, who for years was a symbol of impunity in Africa before turning himself in to the court in 2013 as his powerbase crumbled, looked on impassively as the court’s chief prosecutor, Fatou Bensouda, called him a “notorious and powerful” military leader who commanded troops who slaughtered hundreds of civilians in the resource-rich Ituri region of eastern Congo in 2002 and 2003.

Bensouda told judges that one of her witnesses had to pick through scores of bodies in a field of banana trees to find the bodies of his wife and four children, allegedly killed by Ntaganda’s troops in the armed wing of the Union of Congolese Patriots.

First the witness found his son, a toddler, Bensouda said. He had been disemboweled and his throat slit. His wife, lying nearby, had similar injuries. His 7-month-old daughter’s head had been “punctured” and her throat slit, the prosecutor added.

“Finally, he saw the bodies of his two remaining children,” Bensouda said. “They had suffered the same fate.”

Firestone and the Warlord

Bensouda said that Ntaganda’s forces enlisted child soldiers, boys and girls, sent the boys into combat and used the girls as sex slaves.

The trial also is expected to highlight the widespread plundering of gold and minerals by rebels in eastern Congo. Bensouda said Ntaganda exploited the region’s brutal ethnic conflict to enrich himself.

Ntaganda is expected to make a brief statement to judges later this week. The first witness is due to be called on Sept. 15.