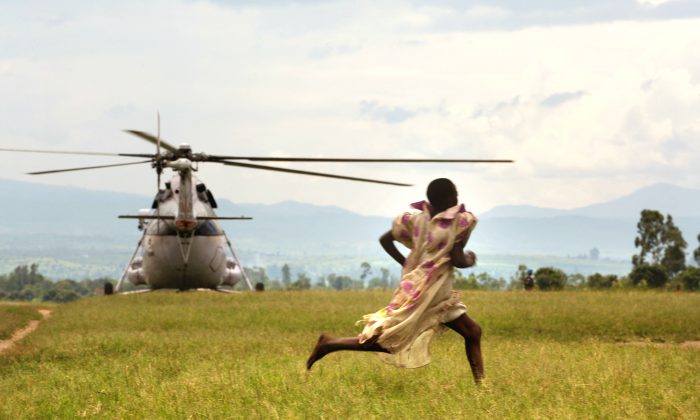 A girl runs as a UN helicopter lands at a refugee camp in Kiwanja, Democratic Republic of Congo on Nov. 07, 2008. (Uriel Sinai/Getty Images)
International

KINSHASA, Congo—Two United Nations officials, one American and one Swedish, have been kidnapped along with four Congolese in the country’s Kasai Central province, Congo’s government said Monday.

Michael Sharp of the United States and Zahida Katalan of Sweden were abducted with three Congolese drivers and a translator while traveling by motorcycle through the region, government spokesman Lambert Mende said.

It was not clear when the kidnapping occurred on a bridge near the village of Ngombe, Mende said, adding that the kidnappers have not yet been identified.

Judicial authorities in the province have opened an investigation and are working with the U.N. mission in Congo to free the people held.

Charles Bambara, spokesman for the U.N. mission in Congo, known as MONUSCO, confirmed that two experts from the mission have disappeared in the country.

“The United Nations and MONUSCO are doing all that is possible at this moment to locate the two experts,” he said.

The U.S. Embassy in Kinshasa said in a statement that it was aware of the reports of a missing U.S. citizen.

“Out of respect for the family during this difficult time, we have no further comment,” it said, referring questions to the U.N. press office.

The U.S. Department of State was monitoring the situation, according to a statement sent by the embassy.

“The U.S. Department of State has no higher priority than the protection of U.S. citizens overseas. When a U.S. citizen is missing, we work closely with local authorities and cooperate fully in their search efforts,” the statement said.