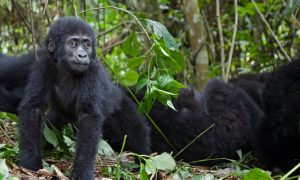 Gorilla Tracking in the Congo
0 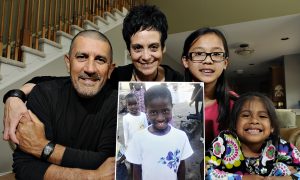 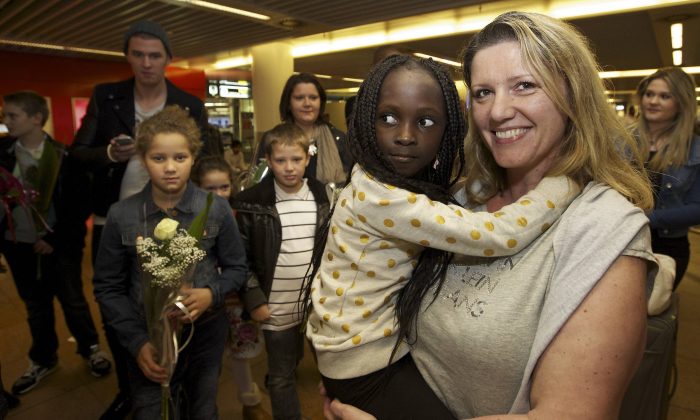 Belgian Laurence Senechal (R) arrives at Brussels National Airport in Zaventem from Kinshasa on Aug. 31, 2014, where she was greeted by her adopted daughter, Imany. (Nicolas Maeterlink/AFP/Getty Images)
Africa

Congo Clears the Way for 72 Adoptions After 2-Year Wait

KINSHASA, Congo—Congo’s government cleared the way Monday for dozens of children to join their adoptive families abroad after more than two years of waiting, though a further 1,000 others will have to remain in orphanages for now.

Fourteen of the children are now headed to the United States, while other boys and girls are going to start new lives in Italy, Belgium, Canada, Germany, France, the Netherlands and Switzerland.

Authorities in Congo put a halt to international adoptions in 2013, saying their adoption system was beset by corruption and falsified documents. The children’s adoptions had been legally approved by the Congolese courts before the government suspended the issuing of exit permits, causing heartache and frustration for families around the world.

On Monday, the Congolese government said that during its review it found “69 dossiers that were perfectly in order and so the children could be authorized to leave.” Three other children with serious medical conditions were also issued paperwork to depart Congo, though their destinations were not immediately known.

“All the other adoption dossiers will wait until the new law on adoptions currently under debate is finalized,” Congolese Justice Minister Alexis Thambwe Mwamba said. “Until the new law is approved, we will no longer discuss these international adoption cases.”

The U.S. State Department, which says about 440 U.S. families are among those waiting for their adopted children to be allowed to travel, confirmed being notified that 14 of those children would be allowed to join their families in the U.S.

Among families still waiting are Evan and Elizabeth Clements of Lamar, Missouri, who were matched with a baby boy in Congo in June 2013, but were unable to get an exit permit for Elijah when the adoption was formally approved in December.

“The big problem is that there are more like 1,000 kids stuck and only letting 72 of them go is absolutely ridiculous,” Evan Clements said in an email. “The (Congolese) government has shown time and time again that they do not hold to their word, so I will not trust them until these kids are home.”

Some of the children are living in squalid orphanages in Congo, sleeping two to a bed.

“There was nothing for them to play with,” Michele Bond, the U.S. assistant secretary of state for consular affairs, told The Associated Press in September. “These are very long periods of time in which small children are just sitting and waiting in very deprived circumstances compared to what they’d have if they were living with their families.”

The adoption freeze was needed because of “adoption law violations that involved the kidnapping of Congolese children from their families,” said Francois Balumuene, Congo’s ambassador to the United States.

“We recognize that the period during which our government reviewed these cases, and continues to review others, has been trying and difficult for the families involved,” he said in a statement. “Our goal is to ensure that all adoptions comply with domestic and international laws and that our children receive the best care and love when they leave the country.”