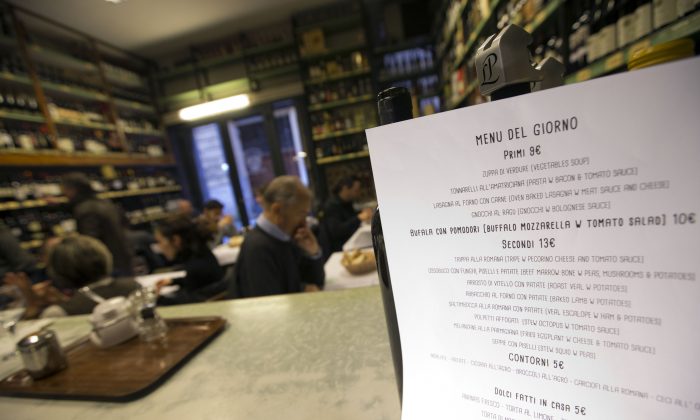 The menu of the Enoteca Corsi near the Pantheon is seen on the counter of one of its two dining rooms in Rome, Saturday, Dec. 13, 2014. A European rule requiring restaurants, bakeries and supermarkets — or anyone mass-producing meals — to list any of 14 allergens that might appear on their menus is being met with confusion. Italy and France, with their strong restaurant and cafe culture, had yet to outline how the rule approved three years ago should be put into effect. With constantly changing menus, cooks in both countries said communication with the customer — not more rules — was key to a good meal. (AP Photo/Andrew Medichini)
Europe

Confusion on the Menu for European Allergen Rule

PARIS—A European rule requiring restaurants, bakeries and supermarkets — or anyone mass-producing meals — to list any of 14 allergens that might appear on their menus is being met with confusion.

Italy and France, with their strong restaurant and cafe culture, had yet to outline how the rule approved three years ago should be put into effect. With constantly changing menus, cooks in both countries said communication with the customer — not more rules — was key to a good meal.

Beatrix Chiusole, a diner at Enoteca Corsi near the Pantheon in Rome, paused as the steam rose from her cheese-topped minestrone (milk, celery, gluten) to ponder the EU rule. Listing every ingredient of everything on the menu “would be a little off-putting” when perusing menus, she said, adding that she herself had no food allergies. “All you need to do is ask the waiter,” Chiusole said.

Often ingredients that might cause allergy sufferers problems cannot be seen, like the celery simmered into the tomato sauce that is ladled onto spaghetti in the kitchen. Jean Terlon, chef and owner of Saint-Pierre in Longjumeau, outside Paris, said he relies on customers to tell him about allergies and can easily change recipes to accommodate them.

“We didn’t wait for Europe to be able to tell customers about allergens if they ask,” he said. “There’s no need for a directive.”

But he acknowledged that the increasing number of restaurants that rely on pre-packaged industrial food have less leeway — and know far less about the ingredients on their menus.

In Britain, where the food safety agency made prominent mention of the requirement in effect Saturday, some described it as a simple change that would make life immeasurably easier for allergy sufferers. Sainsburys, a major British supermarket chain, noted on its website: “we are required to change our allergy labelling and allergy advice boxes.”

“It’s good to keep the customers informed and give them what they want,” said Jane Secker-Jacobs, the owner of a British fish and chip shop. “And I think it’s nice for them to enjoy their food with all their family and not feel left out at all.”

Donna Hindley, who is allergic to butter, recalled asking a waiter if the ingredient was in a vegetable dish she was eating. He told her no.

“After eating just a mouthful I realized yes there is butter in there, and then had to go off to the hospital with anaphylactic shock. So it’s very hard to put trust in if there’s more than one person preparing the food or cross-contamination of equipment, you never know what’s going in,” she told Sky News.

In Berlin, a spot check of half a dozen restaurants found just one that complied with the new directive — in the others, staff claimed ignorance. In one restaurant, the popular “Staendige Vertretung” which serves specialties from the Rhineland, staff had a binder behind the counter with menu items and their associated allergens.

In Madrid, Francisco Rubio who runs a butcher shop in Madrid’s upscale La Paz, said his business was not really affected by the new regulations.

“We were required to list much of that information after the mad cow scare of some 15 years ago,” he said, pointing to labels on his meat and sausages that listed where each animal had been born, fed and butchered.

And Teresa Baeza, who sells ready-to-fry croquettes (fish, gluten, milk), said the regulations were news to her. “I’ve not been asked to label anything yet and no one has visited us to inform about or enforce anything except hygiene,” she said.

In the United States, restaurants are required to have a manager trained about allergens and food preparation, according to regulations passed in 2009. There are no nationwide labelling requirements for restaurants.