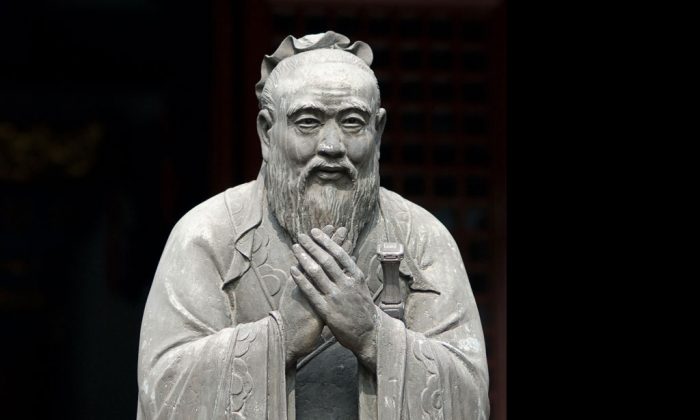 A statue of Confucius at Wen Miao, the Confucian temple in Shanghai. (Sebastiaan de Stigter/iStock/Thinkstock.com)
China

In today’s China, the philosopher Confucius is back. To mark his 2,565th birthday this September, the nation’s president Jinping, paid homage to the sage at an international conference convened for the occasion. “Confucianism,” Xi said, is key to “understanding the national characteristics of the Chinese as well as the historical roots of the spiritual world of the present-day Chinese.”

But for all the fervor of his contemporary defenders, it is unlikely that Confucianism, as a serious moral theory, will significantly shape the character of modern Chinese society.

The Confucian revival that started in the mid-1980s has been expertly described by Sinologists and journalists alike.

The best academic reference is John Makeham’s magisterial “Lost Soul: ‘Confucianism’ in Contemporary Chinese Academic Discourse” which richly illustrates how intellectuals inside and outside of China worked, from the 1980s onward, to resuscitate Confucian thinking in China following its harsh repression under communist leader and founder of the People’s Republic, Mao Zedong.

What is clear from this work is that the impetus for the reinvention of Confucian tradition is not simply a cynical ploy by the Chinese government to bolster its legitimacy—though it is that, too. The point is that there are a variety of social forces that see in Confucianism a potential source of stable cultural identity and soothing historical continuity in a turbulent modern world.

The New Yorker writer Evan Osnos, in his new book, “Age of Ambition,” shows us just how diverse the new Confucianists are.

He describes the Confucius Temple in Beijing, which dates back to the 14th century but fell into disrepair during the Cultural Revolution (1966–1976.) It has now been restored but its manager is more entrepreneur than adept.

A minor Communist Party functionary, he has to ensure that temple activities are politically correct. But in creating new public “rituals,” he takes certain artistic license. He makes up Confucianism as he goes along: some out-of-context quotations here; a new dance number there; a bit of faux classical music to keep the spirits up. A dim understanding of the past is shaped to suit the social and commercial needs of the present.

These are vast questions that occupy the entire intellectual lives of serious scholars. Confucianism itself is not a singular thing: it has branched and permutated over the centuries into a variety of expressions. Perhaps the most essential elements, however, are those that emphasize conscientious ethical behavior that focuses on cultivating our closest loving relationships, especially with our family and friends and neighbors.

Many experts begin a description of Confucian ethics with the notion of “ren,” which can be translated as “humaneness” or “goodness” or “righteousness.” It suggests in its very structure that humans are always embedded in social contexts: the left side of the character is “person,” the right side is “two.” We are not completely autonomous and self-determining. Rather, we find our best selves when we respond to the needs of those closest to us.

As Confucius says in Analects 6:30:

The imperative to do right by others is of central importance to Confucius. We should not be distracted by selfish material gain or social status or political power in our effort to maintain and reproduce humaneness in the world. And that is where the exigencies of modern life obstruct the realization of Confucian ideals in China today.

Where Confucianism Clashes With Contemporary Reality

In the political realm, the ruling Communist Party has, rather ironically, embraced the Confucian revival. Invocations of Maoist-Marxist socialist rectitude ring hollow now in a society roiled by neo-liberal, crony-capitalist economic transformation.

Better to say that the “rise of China” has returned it to historical greatness, creating all sorts of possibilities for connecting the Chinese present with the Chinese past, including Confucianism, however strained the allusions might be.

A decade ago, President Hu Jintao began to extoll China as a “harmonious society,” resonant with Confucian idealism. More recently, Xi has regularly cited classic texts to bolster his image as a learned exemplar of civilized leadership.

But these official references to Confucius, even if they were something more than political posturing, cannot counteract the much more powerful social and cultural changes sweeping across China. Rapid modernization in all of its manifestations—commercialization, urbanization, social mobility, the rise of the individual—have fundamentally transformed the contours of Chinese society.

A yawning generation gap has opened up between current 20-somethings and their elders. Younger people take for granted certain social and cultural freedoms to define themselves for themselves. They are too busy competing for spots in elite universities or vying for the best jobs to attend to filial duties. Family and social bonds are fraying. Nursing homes are a growth industry.

There is much talk, across all age groups, of a “moral crisis” in a society that has lost its normative bearings as the economy and society and culture (though not the political system) precipitously shatter and reconstitute.

Some Chinese might desire a settled “Confucian” ethical framework, but there is no real basis for enacting and institutionalizing it. Material incentives erode social relationships, constant change destabilizes moral continuity.

Historically, Confucianism was embedded in an agrarian society, a complex interweaving of families and villages and market towns steeped in ancient cultural beliefs. At the pinnacle of political power, the Son of Heaven (aka the emperor) watched over All Under Heaven (aka the empire) with the aid of a Confucian-educated elite. That world was destroyed first by civil war and foreign invasion and then by the revolutionary Maoist fanaticism of the 20th century.

China today impatiently modernizes at breakneck speed. All that was solid in the Confucian past has melted into air. In the tumult of the present, Confucius has returned, but only as a vague yet unattainable desire for a more stable cultural identity.

Sam Crane is chair and W. Van Alan Clark ’41 third century professor in the social sciences at Williams College. This article was originally published on The Conversation. Read the original article.