Confronting Communist China Is the ‘Challenge That Will Define the 21st Century’: Sen. Rubio 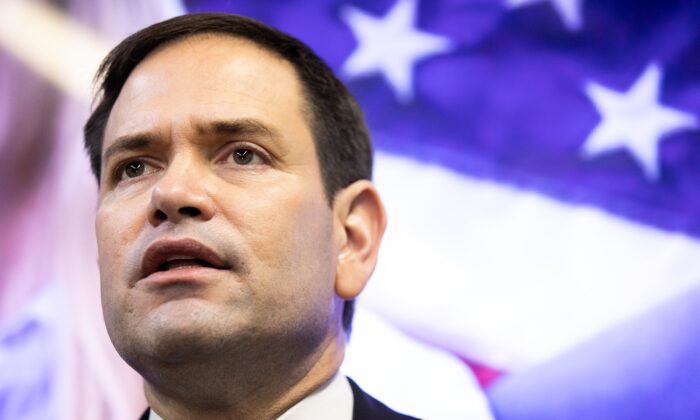 Confronting the Chinese Communist Party (CCP) and the bloc of totalitarian nations it leads will be the defining challenge of the 21st century.

That was the case made by Sen. Marco Rubio (R-Fla.) at a Sep. 13 press conference, during which he implored the democracies of the world to heed the seriousness of the threat posed by an ascendant authoritarianism.

“We live in a moment where there has now been a global awakening, a realization, that the planet is threatened by the rise of a totalitarian bloc, an alliance of totalitarians who seek to redefine the world order in their image,” Rubio said.

The speech was delivered during a summit for the Inter-Parliamentary Alliance on China (IPAC), an international alliance of parliamentarians from democratic nations focused on creating proactive China policies.

Rubio told the IPAC attendees that the CCP is attempting to “upend the global order” and that the manner in which the free nations of the world respond to that attempt is the “challenge that will define the 21st century.”

To that end, Rubio said that the regime’s way of doing things is incompatible with democratic and even basic moral principles.

“[The CCP] doesn’t believe in simple principles like religious liberty, the right to free speech, democratic elections,” Rubio said. “The rule of law becomes subservient to what the governing party wants.

“Their willingness to undermine all of the institutions and the norms of the world to fulfill this ambition is without a doubt the singular geopolitical issue of the 21st century.

“When the history of the 21st century is written, it will be about what happened at this moment in the world and which direction the world took.”

Rubio said that U.S. leadership long believed China would naturally liberalize and become more free as it was increasingly granted more access to the world economy. Instead, he said, the opposite had happened. Rather than joining the international order, the CCP took advantage of trade rules to benefit itself while refusing to adhere to international laws and norms.

It was this point—the CCP’s refusal to play by any set of rules—that Rubio said defined the regime’s relations with the rest of the world.

“It is not simply that nations rise,” Rubio said. “China is certainly a nation with a proud and ancient history. A large nation. An economically powerful nation. That’s not our quarrel.

“Our quarrel is their design to be the world’s most powerful nation and to do so at the expense of everyone else.”

To that end, he warned of the catastrophic consequences that would befall the world should the CCP continue its struggles for global dominance and, specifically, if it should act on its long-held ambition to conquer Taiwan.

Such an event would be a “seminal moment in history,” Rubio said, and would “steer the course of human events for generations.”

A Battle Between ‘Freedom and Tyranny’

Notably, Rubio’s comments came just hours after diplomats from China and Russia explicitly stated that they aim to change the direction of the international order.

Rubio framed the war in Ukraine as the opening confrontation between a CCP-led totalitarian bloc and the democratic nations of the world. He described it as an “unfortunate but necessary battle between the forces of freedom and tyranny … the forces of good and evil.”

Rubio used the language of good and evil to underpin the struggle in historical terms, not as something wholly new, but as something known to humanity innately.

“Human nature is the same today as it was 5,500 years ago, and it is a nature which causes those in power to oftentimes seek to subjugate and enslave those who have less power. And it is a desire of our fallen nature that is never satisfied, that can never be negotiated with it, that can only either be surrendered to or defeated.”