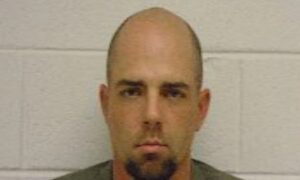 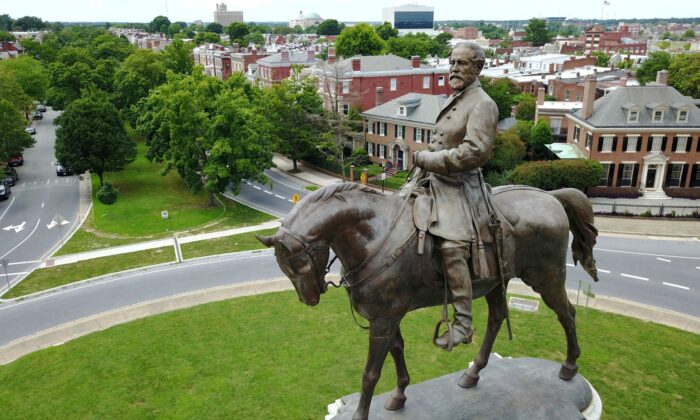 The statue of Confederate General Robert E. Lee that stands in the middle of a traffic circle on Monument Avenue in Richmond, Va., on June 27, 2017. (Steve Helber/AP Photo)
US News

Clashes between President Donald Trump supporters and counter-protesters erupted in Virginia on Sunday in the vicinity of a monument to Confederate Gen. Robert E. Lee.

A mobile rally dubbed the “Trump Train” started in Henrico County and made its way into the city of Richmond in the afternoon, according to the Richmond Police Department.

Rally vehicles drove to the Lee Monument circle “and confrontations with individuals at the circle ensued,” police said in a brief incident summary.

Some of the vehicles left the roadway and crossed grassy medians near the area. Photographs published by a local broadcaster showed tire tracks on the grass and a concrete block spray painted with “ACAB,” an anti-police acronym, along with damaged Trump campaign signs and flags.

At about 4:15 p.m., police officers responded to a nearby avenue to investigate a report of an unoccupied vehicle struck once by gunfire. Several minutes later, a female protester reported being pepper sprayed by a person who was in a vehicle.

No other injuries were reported to police.

Officers cleared the area and investigated the assault. The intersections around the monument were closed to traffic.

No arrests have been reported.

Anyone with information about what happened was asked to call the police.

Frank Hunt, 30, a Richmond handyman who was protesting at the monument, told the Daily News-Record that he “almost died” during the clashes. A bang that was heard during the clashes was a gunshot, he said. Others thought it was a car backfiring.

Richmond City Council candidate Mike Dickinson, who helped organize the Trump rally, said protesters were aggressive in blocking the path of the convoy and told the paper that if a shot was fired, it was because protesters used violence against the ralliers.

“As you could see today, we have a culture of lawlessness and mob attack mentality,” Dickinson said. “It’s ridiculous that in the city of Richmond, you can’t drive down our roads without having people throw bottles at you and attack your vehicle and be violent towards you.”

A police spokesperson told The Epoch Times via email that no charges have been filed and the investigation continues.

Asked whether police could confirm that a gunshot or gunshots were fired, he referred to the department’s previous statement. That press release “indicates a male reported his unoccupied vehicle was struck once by gunfire and no injuries were reported,” he wrote.

Dozens of people have gathered at the monument on a regular basis to call for its removal.

More than 50 people who live nearby planned to file a “friend of the court” brief to push officials to take the monument down, lawyer Greg Werkheiser told WRIC last week.

A judge ruled last month that Virginia Gov. Ralph Northam, a Democrat, can take the monument down but a group protesting the planned move appealed the decision to the state’s supreme court.