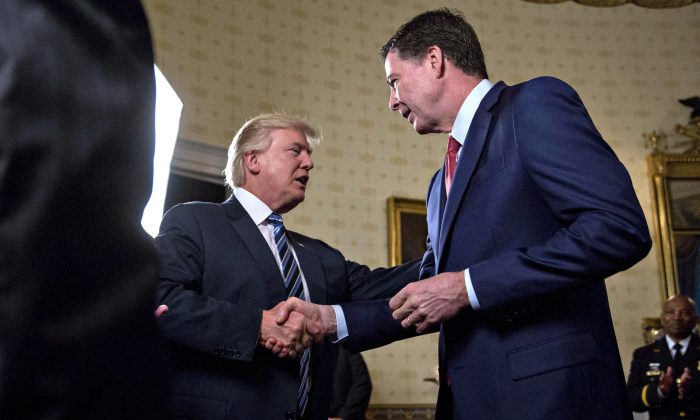 President Donald Trump (C) shakes hands with James Comey, director of the Federal Bureau of Investigation (FBI) in the Blue Room of the White House in Washington, DC on Jan. 22, 2017. (Andrew Harrer-Pool/Getty Images)
US

FBI Director James Comey, the target of bipartisan criticism over his handling of politically sensitive investigations, is staying in his job as head of the law enforcement agency.

FBI directors are appointed to 10-year terms intended to carry across presidential administrations, even when a new party takes over the White House. Comey, who was appointed by President Barack Obama, is in the fourth year of his term and has spoken publicly about his enthusiasm for remaining in the job.

President Donald Trump criticized the FBI during his campaign for its decision not to recommend charges against his Democratic opponent, Hillary Clinton, over her use of a private email server. He called the bureau’s decision a “horrible mistake.”

In a CBS “60 Minutes” interview after the election, Trump said he hadn’t decided whether to keep Comey on, though he did appear to greet the FBI chief warmly last weekend at a ceremony for law enforcement officials.

Although an FBI director can be fired by the president, only one since 1976 has been removed prematurely—Reagan appointee William Sessions by Bill Clinton in 1993.

Comey was fiercely criticized by Democrats for a letter he sent Congress 11 days before the election that said the FBI had discovered additional emails in the Clinton investigation that it wanted to review. Then just before Election Day, he said the emails had done nothing to change the FBI’s conclusion.

The episode infuriated Clinton supporters who said the discovery shouldn’t have been made public so close to the election, and that it had damaged her chances. Comey has since been criticized for refusing to discuss with Congress any investigation the FBI might be conducting into connections between Trump aides and Russians, leading to charges of a double standard.

The FBI also has been investigating alleged Russian interference aimed at helping Trump win the presidency.

Comey would continue to run the agency amid an ongoing Justice Department inspector general investigation, announced earlier this month, into the FBI’s handling of the Clinton email probe. It will look at whether Comey broke with Justice Department protocol in sending the letters to Congress and whether agents improperly disclosed nonpublic information. Comey has said he welcomes the review.

The New York Times first reported that Comey would stay on.