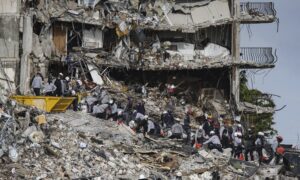 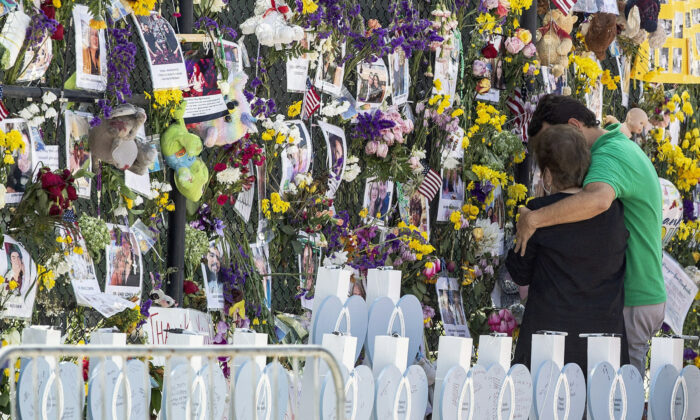 People mourn at the memorial wall for the victims of the Champlain Towers South collapse, in Surfside, Fla., on July 8, 2021. (Pedro Portal/Miami Herald via AP)
US News

FORT LAUDERDALE, Fla.—On Saturday, authorities raised the confirmed death toll from the collapse of a Miami-area condominium tower to 86, with 43 people still missing.

At the Seaview Hotel, a vast and once impersonal ballroom has become a refuge—a shared space of hope and sorrow where grieving families comfort each other during the agonizing wait for news of relatives trapped inside the collapsed Champlain Towers South condominium building in Surfside, Florida.

Twice a day, every day, for more than two weeks, relatives of the victims have huddled in the spacious room, a new daily routine thrust upon them by an unfathomable disaster.

Many members of this tiny community forged in tragedy have started arriving to the meetings early and staying late. They linger in small groups, talking. They hug each other, bring each other water and tissues. On days when information is scarce, rescuers, including those from other countries, circulate through the room, offering more detailed tidbits.

Officials announced on Wednesday that they were switching their mission from rescue to recovery, but there is no plan to stop the private briefings for the families, said Maggie Castro, a Miami-Dade firefighter and paramedic who keeps relatives updated and has forged her own connections with them.

“Obviously, this is a huge tragedy, but if I can find some kind of bright spot in this whole thing, it’s to be with these families, watching their emotions come and go and … watching them evolve through their stages and then also watching them bond,” Castro said.

Soriya Cohen’s husband, Brad Cohen, is still missing. Her brother-in-law Gary Cohen was found Thursday, and her two children are begging rescuers to search a similar grid line to find their father.

“The community outpours so much love,” she said, recalling how volunteers wrapped her in a blanket, brought her food and coffee in the initial days after the collapse and “surrounded me with so much emotional support.”

She still has the blanket, she said in a text Friday.

Rachel Spiegel, whose mother, Judy, is still missing, said she, her father, and her brother also have made connections with other families inside the room, but she stopped short of calling it comforting.

“I don’t know if I would define it as comfort yet because we still don’t know where my mom is. She’s still missing.”

While sobs could be heard in the background Wednesday night as officials announced they would shift from rescue to recovery, largely dashing any hope of survivors, some families said they won’t feel different until they have final word on their loved ones.

“It’s hard to digest,” Spiegel said in a phone call. “Many people did say they feel the shift. For us, we just want to find my mom and be reunited with her. We’re still hoping for the best. We’re going to have this shift once we find her and are reunited with her.”

The Cohen family said not having any updates about Brad Cohen was agonizing.

“I don’t think the terminology of rescue versus recovery matters. It’s semantics,” said Soriya Cohen. “They will find people in whatever state they are in, however it’s termed.”

Other families told rescuers they did feel a sense of finality once workers started searching for victims instead of survivors.

“There has been a sort of shift I think toward acceptance but also obviously with that comes some sadness,” said Castro, adding that the families are physically and emotionally exhausted. “It’s a lot, a lot of emotional roller coasters that they’ve been on, just trying to stay positive and hold out the wait,” she said.

The family briefings are surrounded by heavy security, with various checkpoints to protect their privacy.

Organizations set up at a line of tables in the room offer everything from free international phone calls and counseling to clothing and housing. Several snowbirds are offering their Surfside homes to displaced survivors, said Rabbi Yakov Saacks, a family friend who flew from New York to comfort the Cohens. The owner of a 16-unit building opened it up rent-free to Surfside survivors for the month of July.

Huge platters of catered food sit day and night, including glatt kosher meals, all donated by community members longing to ease the pain.

The nearby Shul has been transformed into a huge clothing and dry goods facility for families to pick up items while they wait.

Saacks described the ballroom as painfully quiet at times.

“While families were either sitting or standing together, they were, for the most part, just silently and painfully waiting for news,” he said. “While some families would welcome any news at that stage, others would welcome only good news.”