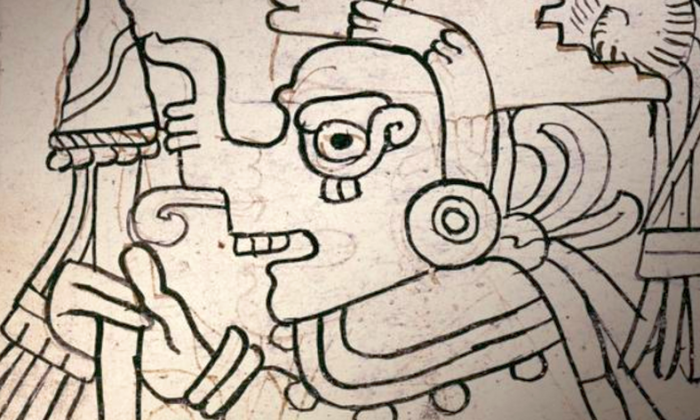 A mysterious 13th century manuscript—an astronomy guide—that was long believed to be an elaborate hoax was recently declared to be authentic.

The document, written about 900 years ago, was first displayed in 1971 in the Grolier Club in New York City, and it was named The Grolier Codex. It was made out of stucco-coated bark paper and folded into an accordion-like shape. It contains Maya-style artwork—gods, warriors, hieroglyphs, and other figures. It also charts the movement of the planet in a calendar that spans about 104 years.

When it surfaced in the early 1970s, it was suspected to be a forgery, as it was not discovered by archaeologists, but by looters, who sold it to a Mexican collector, Josué Sáenz. He claimed he was contacted by the looters and was taken to a remote airstrip via plane to collect several artifacts. The seemingly fantastical story of how he acquired the manuscript prompted some archaeologists to decry it as fake, igniting a debate about its authenticity.

But recent radiocarbon dating showed that the pages of the bark paper of the alleged Maya codex dates back to around 1230 AD.

“It became a kind of dogma that this was a fake,” study co-author Stephen Houston of Brown University said in a statement. “We decided to return and look at it very carefully, to check criticisms one at a time. Now we are issuing a definitive facsimile of the book. There can’t be the slightest doubt that the Grolier is genuine.” The paper was published in the journal “Maya Archaeology”

The Grolier codex is the oldest surviving manuscript from the pre-Colombian era https://t.co/0SiVoTtFIz pic.twitter.com/sWd4CRCYdk

This means that the Grolier Codex is the oldest of all surviving manuscripts from the Americas.

The study, Houston added, “is a confirmation that the manuscript, counter to some claims, is quite real. The manuscript was sitting unremarked in a basement of the National Museum in Mexico City, and its history is cloaked in great drama. It was found in a cave in Mexico, and a wealthy Mexican collector, Josué Sáenz, had sent it abroad before its eventual return to the Mexican authorities.”

The researchers noted that the gods shown in the manuscript are “workaday gods, deities who must be invoked for the simplest of life’s needs: sun, death, K’awiil—a lordly patron and personified lightning—even as they carry out the demands of the ‘star’ we call Venus. Dresden and Madrid both elucidate a wide range of Maya gods, but in Grolier, all is stripped down to fundamentals.”

The manuscript was likely created around the time when the Maya capital, Chichen Itza, and the city of Tula fell into decline. The scribe who made it worked in “difficult times,” Houston wrote.