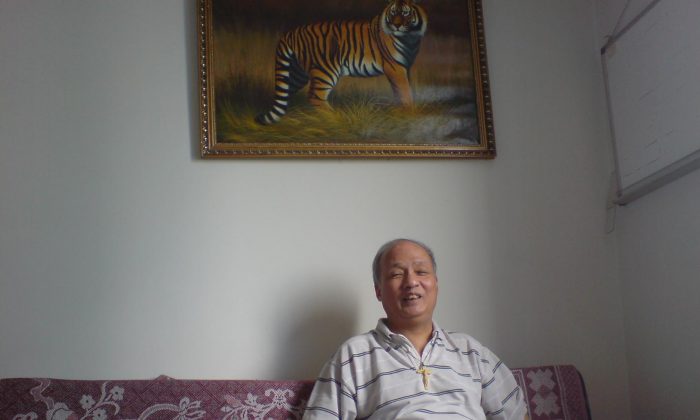 Zheng Enchong, a lawyer in Shanghai with political connections, recently experienced a strange form of detention and coerced luxury: He was abducted by local police, taken to a three-story villa on an island in Shanghai’s Angel Bay Vacationland, and plied with the finest food and drink.

It was all part of an elaborate attempt, he said, to have him change his political allegiances—or at least stop talking to the overseas Chinese media about his political nemeses: the clan of Jiang Zemin, the former Party leader, who have run the city of Shanghai like a fief for several decades.

Zheng spent five days in the villa, from July 11 to July 15, under the watchful eye of Shanghai security forces. His wife, Jiang Meili (no relation to Jiang Zemin), was also present. Between meals, they were confined to separate quarters.

Fourteen security personnel—policemen, domestic security agents, public security bureau officers—watched over the couple. Of course, their duties included partaking in the sumptuous meals meant to impress Zheng: There was lamb, pork, lobster, seasonal vegetables, and fine wines—top-grade reds, huangjiu (a type of Chinese grain wine), and even a bottle of expensive Maotai Chinese liquor. The villa had faux French windows that afforded a view of the Yangtze River.

Zheng, seeing the ruse, “didn’t drink a drop with them,” he said in an interview after the strange ordeal. Instead, he reminded them of Party leader Xi Jinping’s new ban on officials consuming alcoholic beverages while on duty, and chastised his minders for wasting public funds.

He opted for soft noodles, rice porridge, and dumplings.

The reason for the lavish treatment was quickly made clear: Zheng’s silence was being bid on.

Because he has tangled with Party elements in Shanghai for so long—he was jailed in 2003 for trading “state secrets” merely for faxing information about protests to a labor NGO—Zheng, 66, has a network of informants who keep him apprised of the latest in Communist Party factional struggles. Over the last six months, he has been active in writing and speaking critically against Jiang Zemin and his family members, including giving detailed interviews to the Chinese-language version of Epoch Times.

If he would simply shut up, a series of other perquisites would be provided, the security agents said.

First, Zheng’s wife, Jiang Meili, would be allowed to visit their daughter who is living in the United States. Second, Zheng would receive a monthly stipend of 1,500 yuan (about $225). Finally, the police are looking to stop surveilling him and return his freedom; a security detail currently watches over Zheng for 24 hours a day in three shifts.

The agents had to report on the “negotiations” to their superiors daily, Zheng said. Also, a domestic security official and other senior police had sailed out in a ferry during heavy wind and rain on one of the days just to “inspect” the situation at the villa.

The Shanghai security authorities have reason to want Zheng muffled, given the sensitive nature of the information he has been providing.

Zheng had told the Epoch Times that he had learned from “extremely reliable” channels that former Party leader Jiang Zemin and his son Jiang Mianheng have had their movements restricted. Old classmates had also invited Zheng to a gathering to celebrate “the fact that Jiang Zemin’s finished,” Zheng told international broadcaster Sound of Hope Radio in June.

Jiang was Party leader from 1989 to 2002, and he continued to wield power from behind the scenes through his sprawling political network for over a decade after stepping down. Under Jiang’s reign, China’s environment was sacrificed for rapid economic growth, crony capitalism was entrenched, and Party cadres grew immensely rich through corruption.

Jiang is perhaps best known for having ordered the persecution of Falun Gong, a Chinese meditation practice. The persecution has included forced ideological conversion, torture, and forced organ harvesting. Researchers estimate that the Chinese regime performed 1.5 million transplants over the last 15 years, the bulk of which is believed to have come from Falun Gong practitioners killed in the process.

During mealtimes, Zheng even starting “exposing the Shanghai clique, exposing Jiang Zemin’s son, and exposing the conduct and deeds of Jiang Zemin” to his interlocutors. “They didn’t have the slightest response,” he said, and appeared dejected, despite the food on offer.

Later, Zheng learned that his guards were in fact resentful of their superiors.

“One cop was only two months away from retiring,” Zheng said. “He has been standing watch over me for over seven years. In the villa, he once had too much to drink, and said drunkenly: ‘I’ve mixed with miserable company! Frankly, I’ve been sold out by my leader.'”

The policeman’s outburst shocked Zheng, but several others on the detail also expressed their discontent. “They felt that they were carrying out an important job for their superiors by watching over me all these years,” Zheng said.

But now that Jiang Zemin’s influence appears to be distinctly on the wane, the sort of pointed bullying of Jiang’s opponents, like Zheng, will no longer be called for.

The failed villa episode seemed to be an attempt by Shanghai security officers to sever the relationship on agreeable terms.

“Now they’re feeling that their superiors have betrayed them,” Zheng said. “I feel that this is a good thing.”