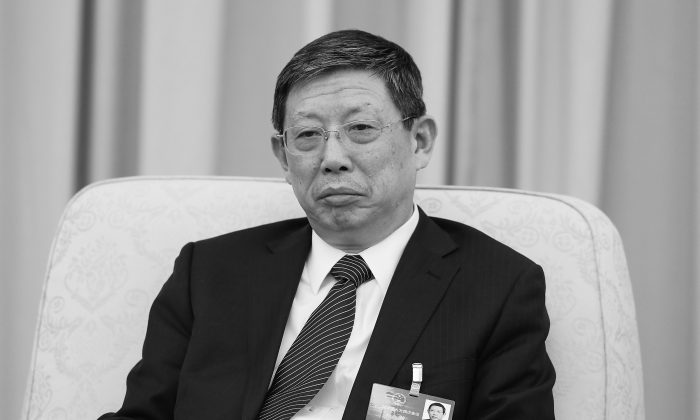 Former Shanghai Mayor Yang Xiong at the Great Hall of the People in Beijing on Mar. 6, 2016. Yang resigned his post on Jan. 17. (Lintao Zhang/Getty Images)
China

News that former Shanghai mayor Yang Xiong resigned from his post was formally announced on Jan. 17.

But Zheng Enchong, a Chinese human rights lawyer who has long been under house arrest for offending the political clique in Shanghai loyal to former Communist Party head Jiang Zemin, learned that Yang’s career was likely finished days before it became official.

First, Zheng kept hearing negative rumors about Yang and his corrupt dealings with Shanghai businessmen and the political elite.

Then two days before Yang stepped down, “someone requested that I pay attention to Baidu,” the Google-like Chinese search engine, Zheng told Epoch Times in a recent interview. “I was shocked when I saw news pertaining to me on the first column [of Baidu’s news section]: ‘Zheng Enchong Denounces Jiang Mianheng.'”

Zheng believes that the tip-offs he received ahead of Yang Xiong’s resignation and a further relaxation of his house arrest are “crystal clear” signs that Jiang Zemin’s clan and political faction are being “cleaned up,” and that Zheng has silent supporters in the system who want to see them go.

Jiang Mianheng is the elder son of Jiang Zemin. The elder Jiang is also the boss of the “Shanghai Gang,” the political clique whose key members saw that Zheng was punished in 2003 for daring to stand up to them in representing those they disenfranchised. Zheng was sentenced to three years in jail on trumped up charges and immediately placed under strict house arrest upon his release.

From March 2016, however, Zheng Enchong found restrictions on him being increasingly lifted—police stopped following him and his wife when they left home and removed his curfew.

Zheng has also been able to discuss with overseas media the sensitive information he has received concerning the moves by Xi Jinping leadership’s to dismantle the political presence of Jiang Zemin in Shanghai. Xi has been chipping away nationwide at Jiang’s influence since becoming China’s leader in 2012 in a bid to consolidate his control over the regime.

Zheng said in his latest interview that he felt a change in the air after “seeing the Chinese Communist Party-controlled internet carry my denunciation of Jiang Mianheng.”

Zheng added that about twenty days before receiving the tip-off on ex-Shanghai mayor Yang Xiong, “a person” had instructed him to do a search on Baidu. After a two-hour search, he found reports by the United States on human rights in China from the years 2003 to 2013. Zheng’s persecution was mentioned in all of the reports he found.

Epoch Times wasn’t able to verify what Zheng Enchong saw on the Chinese version of Baidu. However, sensitive information concerning key Party cadres are known to be briefly searchable from time to time on the Chinese internet, and the manipulability of Baidu search results has been documented in detail elsewhere. Observers of elite Chinese politics consider such internet leaks to be a sign that trouble is afoot for the cadres in question.

Zheng reported even further relaxations in the surveillance over him. The policemen assigned to follow him merely trade stocks on their phones outside his door, he said, or sometimes simply skip their shifts.

Also, some welcome personnel changes were made to the security detail watching Zheng.

“Earlier, those security guards who were nice to me were cautioned and transferred away. But two days ago, a very vicious guard who always reported every little thing I did was suddenly shifted out. I feel that at on the surface, there’s very obvious changes in the manner in which I’m being treated,” he said.

Yang Xiong giving up his position as Shanghai mayor is in itself an indication of Jiang’s weakening influence in his longtime political stronghold.

Yang, 63, is two years away from the official retirement age for senior Chinese officials. These officials usually see out their careers if they are in top positions—Shanghai is a provincial-level administrative unit and a global financial hub—and then immediately take up sinecure roles in the Chinese regime’s top political consultative body.

However, no adequate explanation accompanied Yang’s early departure, nor is there current word of any new assignment.

Yang could be left out in the cold by the Xi Jinping leadership because he has been part of the Jiang-controlled Shanghai political establishment since 2001, and is also closely connected to the Jiang family.

Yang was general manager of Shanghai Alliance Investment Ltd., an investment firm that officially belonged to the Shanghai municipal government, when it was first set up in 1994. The investment firm, however, was widely regarded as “Jiang Mianheng’s company” and was run as a vehicle for Jiang’s personal assets and business interests.

“In Shanghai, the pressure on Jiang Mianheng is ramping up,” Xin Ziling, a retired Chinese defense official with direct channels to moderate voices in the Party elite, told this newspaper in a recent interview.

Xin adds that a replacement for Han Zheng, the current Shanghai head and member of the Jiang faction, has already been lined up.

Meanwhile, Ying Yong, the new Shanghai mayor, is considered to be in Xi Jinping’s camp. When Xi was Party secretary of Zhejiang Province (from 2002 to 2007), Ying was placed in charge of anti-corruption work, and later headed the provincial high court.