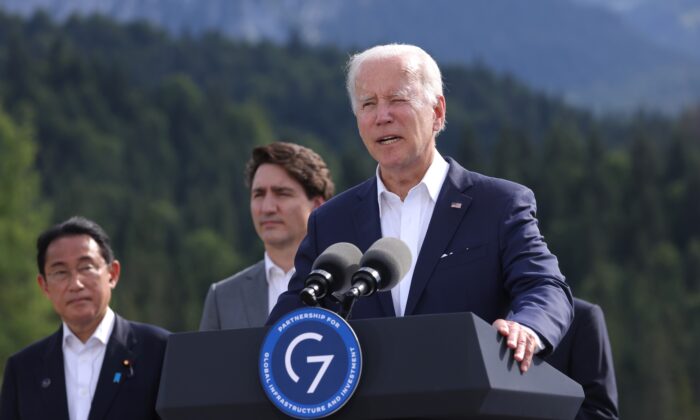 U.S. President Joe Biden speaks at the "Global Infrastructure" side event as Prime Minister of Japan Fumio Kishida and Canadian Prime Minister Justin Trudeau look on during the G-7 summit at Schloss Elmau near Garmisch-Partenkirchen, Germany, on June 26, 2022. (Sean Gallup/Getty Images)
US

Americans’ confidence in major U.S. institutions—including government and the media—is in a state of collapse, falling to an average of just 27 percent across all categories, according to the latest national poll released by Gallup.

Only the military and small business still enjoy the confidence of a majority of Americans.

Although public belief in institutions has been weak for most of the past 15 years, the 27 percent average for all categories is the lowest recorded by Gallup.

The company began measuring confidence in institutions in 1973 and has done so each year since 1993.

The survey’s figures came after Gallup delivered sobering news on June 22. The company said confidence in the overall direction of the country fell to 13 percent that month, down 3 percentage points from May and down 9 points since March, when the figure was 24 percent.

It also reported at that time that despite ongoing economic malaise, President Joe Biden’s job approval rating held steady at 41 percent between May and June.

Gallup’s finding on the issue was called into question by Civiqs’s daily tracking survey of registered voters, which found Biden’s approval rating has sunk to a new record low of just 30 percent, the New York Post reported on July 9.

Only in two states—the Democratic strongholds of Vermont and Hawaii—are the president’s supporters more numerous than his detractors, the Civiqs poll showed.

Gallup also reported on June 29 that, although 96 percent of U.S. adults expressed pride in varying degrees about being American, a record low of 38 percent considered themselves “extremely proud” to be American, the lowest figure for that description since the company began tracking the issue in 2001.

Four percent said they were “not at all” proud to be American.

In the new Gallup survey, Americans expressed less confidence in institutions than they did a year ago, with significant declines in 11 of the 16 categories examined—and no improvements for any of the institutions.

The biggest drops were in the presidency as an institution—as opposed to the job performance of the current president—and the Supreme Court.

Confidence in the presidency is now at 23 percent, which is 15 percentage points lower than in 2021.

The Supreme Court came in at 25 percent, down 11 points since 2021. The survey was completed before the court rendered landmark rulings on gun rights and abortion, decisions that have proven controversial.

Confidence in Congress came in at just 7 percent, down from 12 percent a year ago.

The figures for the presidency, Congress, and the Supreme Court were record Gallup lows.

Large technology companies weighed in at 26 percent, down from 29 percent. Gallup has been measuring confidence in this category for only three years.

Small business and the military still enjoyed the confidence of a majority of Americans, despite slipping support. Small business came in at 68 percent, down from 70 percent in 2021. The military had a confidence level of 64 percent, which is lower than the previous 69 percent figure.

Confidence in television news was down to 11 percent from 16 percent in the 2021 survey.

The new annual survey was carried out by telephone in the first three weeks of June. The respondents were 1,015 adults in all 50 states and the District of Columbia.