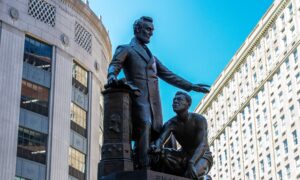 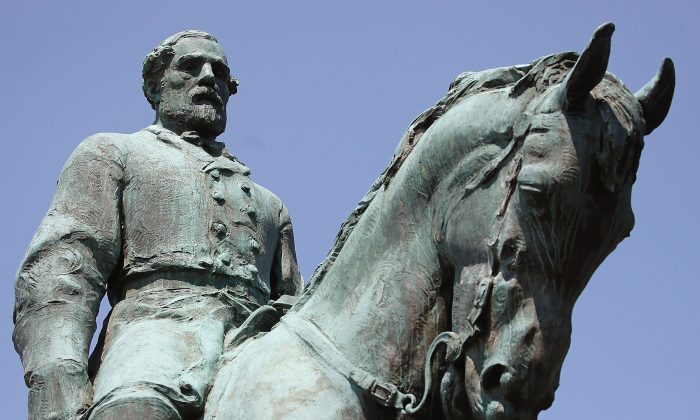 The statue of Confederate Gen. Robert E. Lee stands in the center of a park in Charlottesville, Va., in a file photo. (Mark Wilson/Getty Images)
Politics

Virginia’s governor announced Monday that his state chose to remove the Confederate statue of Robert E. Lee from the U.S. Capitol building, adding that the statue of Lee will be replaced by a statue of civil rights leader Barbara Jones.

Gov. Ralph Northam, a Democrat, expressed his support for the removal of the Lee statue, writing on Twitter, “Last night, Virginia removed its statue of Robert E. Lee from the U.S. Capitol. This is an important step forward—it is past time we tell our story with images of perseverance, diversity, and inclusion.”

Each state is permitted to have two statues in the U.S. Capitol’s National Statuary Hall Collection, but a Virginia state commission decided to replace the statue of Lee, which had been placed there in 1909 along with President George Washington’s statue.

“The Confederacy is a symbol of Virginia’s racist and divisive history, and it is past time we tell our story with images of perseverance, diversity, and inclusion,” Northam said in a statement. “I look forward to seeing a trailblazing young woman of color represent Virginia in the U.S. Capitol, where visitors will learn about Barbara Johns’ contributions to America and be empowered to create positive change in their communities just like she did.”

Speaker of the House Nancy Pelosi (D-Calif.) also praised the removal of the Lee statue, writing that it was “welcome news.” She added, “The halls of Congress are the very heart of our Democracy, and the statues within the Capitol should embody our highest ideals as Americans.”

“That is why, in my first term as House Speaker, under the leadership of Democrats in Congress, we relocated the Robert E. Lee statue out of a place of honor in National Statuary Hall, where a statue of Rosa Parks now proudly stands,” Pelosi wrote in a statement on Monday.

“And it is why we have worked to remove other symbols of hate in the Capitol and across our country, including by passing legislation this summer to remove statues of Confederate officials and other representatives of bigotry from the Capitol and by beginning the process of renaming military bases and infrastructure named after Confederate leaders through this year’s National Defense Authorization Act (NDAA).”

Pelosi is referring to Senator Elizabeth Warren’s (D-Mass.) amendment to the Fiscal Year 2021 NDAA, which was filed in June, with the aim of removing all names, symbols, displays, monuments, and paraphernalia that honor in any way, the confederacy.

Warren who is a progressive former presidential candidate has said that the U.S. is a racist country and ridding the nation of these symbols will help “end decades of injustice.”

“As a member of the Senate Armed Services Committee, I filed an amendment to the annual defense bill last week to rename all bases named for Confederate generals. It’s long past time to end the tribute to white supremacy on our military installations,” Warren said.

“It has been suggested that we should rename as many as 10 of our Legendary Military Bases, such as Fort Bragg in North Carolina, Fort Hood in Texas, Fort Benning in Georgia, etc. These Monumental and very Powerful Bases have become part of a Great American Heritage, and a history of Winning, Victory, and Freedom. The United States of America trained and deployed our HEROES on these Hallowed Grounds, and won two World Wars. Therefore, my Administration will not even consider the renaming of these Magnificent and Fabled Military Installations. Our history as the Greatest Nation in the World will not be tampered with. Respect our Military!”