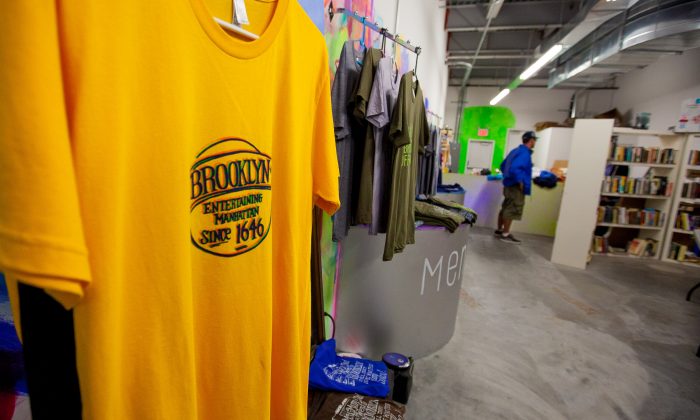 Coney Tees, Made in US, Meant for the World

Brooklyn Rock has been open for business for four months. Chris Smith makes and sells T-shirts printed with stark Brooklyn motives: riddled with wordplay, cultural and historical references, and a signature Brooklyn sense of humor.

Smith admits too that it reflects on the price. Most T-shirts go for $24 apiece.

“People are so used to buying at discount stores that they’re a little shocked at the price sometimes,” Smith said.

Every design in the store has a story behind it.

Chris said his signature design, “Brooklyn: Entertaining Manhattan since 1646,” conveys an essential local quality of turning an insult into an advantage.

“Most people would recognize Brooklyn Dodgers, the baseball team,” he said. “Originally it was called the Brooklyn Trolley Dodgers.”

“Trolley dodger” was a derogatory term used by Manhattanites to describe people from Brooklyn. “It’s like they’re so stupid they don’t even know a train’s coming,” Smith said. But instead of protesting, Brooklynites used it as a name for their baseball team.

“They embraced it and turned it into a joke on themselves. And it developed into sort of a legacy. Plus there’s so many great comedians that came out of Brooklyn,” Smith said, referring to comedy legends like the Three Stooges, Larry David, Eddie Murphy, Jerry Seinfeld, and Adam Sandler.

Although inspired by Coney Island’s landmarks and Brooklyn in general, Chris believes his designs reach beyond the local themes.

“It’s sort of using Brooklyn as a metaphor for things,” Smith said. “Concerns here are probably concerns of people all over the world.”