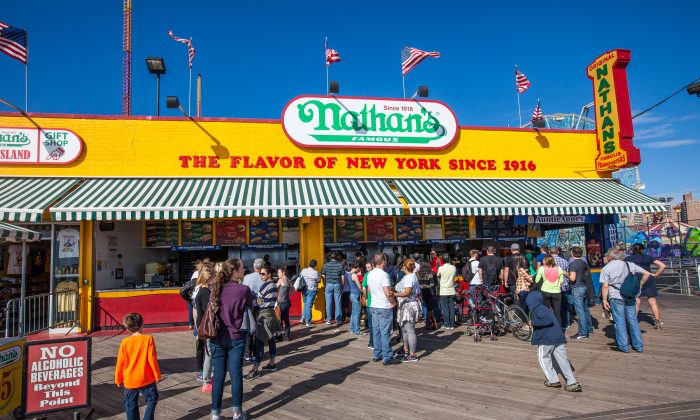 NEW YORK—Despite the destruction from Hurricane Sandy, the beach on Coney Island opened on March 24, right on schedule. Across the clean boardwalk, the carousels in Luna Park spun with smiling children.

To get the iconic Wonder Wheel running by the time the beach opened, the Vourderis family spent months cleaning and repairing the ride, after seawater and sand brought by Sandy damaged the electric systems.

On Independence Day, crowds packed the beach, and many waited for up to half an hour for a hot dog from Nathan’s Famous.

Today, viewed from the beach, Coney Island looks normal—at least on the surface—but just two blocks from the boardwalk, repercussions of the catastrophe are still echoing throughout the neighborhood.

The flood wrecked every single one of the 126 small businesses on Mermaid Avenue; 13 never opened again, and 3 are still renovating, according to Eric Levy, Development Director at Astella Development Corp., a nonprofit helping people connect with recovery agencies.

“They had to borrow up to their eyeballs to get the summer going,” said Charles Reichenthal, district manager of Brooklyn Community Board 13, about the shoreline businesses in his district.

Standing in a freshly renovated pharmacy on Mermaid Avenue, it’s hard to believe the place has been to hell and back in the past year.

Vincent Rodriguez, the man behind the counter, helped to rebuild the pharmacy after Sandy struck.

He recalled how in the middle of the night on Oct. 29 he went down to the second floor of his high-rise public housing building and the lobby was completely under water. “I’ve seen the ocean pouring in to the streets. People panicking, trying to park their cars. Just chaos,” he said.

But the real shocker came in the morning. “You walked through the avenues, there were cars on top of gates,” Rodriguez said.

It took a couple of weeks for the Army Corps, the New York City Department of Sanitation (DSNY), and volunteers to get all of the 272,000 cubic yards of sand off the streets and back to the beach. Another 600,000 cubic yards were added recently for reinforcement.

The pharmacy was obliterated, just as was every other business in the area. It took the staff a week to clear out all the debris. The business opened just to give the necessary medicine to its patients.

It wasn’t, however, until just two months ago that the pharmacy looked like it does today.

Based on discussions with business owners and local residents, there was no coordinated effort to restore businesses. Everyone had his or her own problems and solidarity was usually limited to neighbors helping each other.

Still, many praised the public agencies that helped, especially the DSNY, which cleaned up the streets.

Before the first grocery stores were able to open, food and water rations were quickly arranged and distributed. The Federal Emergency Management Agency (FEMA) was quick to respond as well, although some entrepreneurs were disappointed upon learning that the agency’s grants were intended for homes, not stores.

Edwin Cosme, who lost his beauty salon and an electronics store to the storm, received $16,000 from FEMA for a new boiler in his residential building, and $25,000 in low-interest loans from the New York City Department of Small Business Services (SBS) for each of his ventures.

The money helped, but it couldn’t possibly cover the more than $100,000 he invested to reopen his businesses.

For the time being, Cosme is, at best, mildly optimistic.

“It’s better, but it’s not the same,” he said. “Many people left. You have to build a new clientele base, and it’s tough for many businesses.”

Magda Perez and her husband have a butcher shop on Mermaid Avenue. They were set to open their first business on Oct. 31, 2012. One day before the stock shipped in, Sandy came.

The couple returned the day after to see the store, and were speechless.

“Everything was knocked down. Sand, mud, grease, dirt,” Perez, who found little fishes in the rubble, said. “It was disgusting.”

It took the couple five months to build the store anew. They received a low interest loan from the SBA to fund the repairs.

But what helped then, is today becoming a worry. “SBA owns everything in here,” Perez said. “If another storm happens, guess who’s gonna get paid? SBA, not me, and meanwhile I’m paying for the insurance.”

Perez noted nobody expected the biggest flooding to come from the north, Gravesend Bay and Coney Island Creek. “Everybody was focusing on the ocean,” she said. “But the bay came out first and it met with the ocean.”