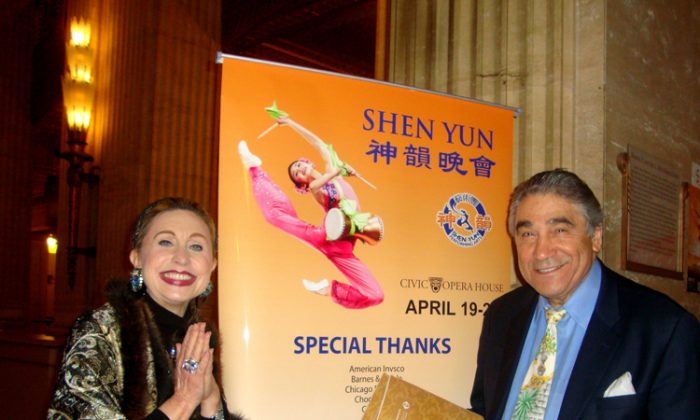 Condo Developers About Shen Yun: ‘You feel like you’re in paradise’

Chicago—The audience was packed at Chicago’s Civic Opera House as Shen Yun Performing Arts International Company put on its second to the last show in the Windy City.

Shen Yun, literally meaning “the beauty of divine beings dancing,” was established in 2006 with the mission to revive traditional Chinese culture, says Shen Yun’s website. This mission inspires every aspect of a Shen Yun performance, endowing it with an incredibly uplifting spirit. The audience members are taken to an epic journey into the heart of a divinely inspired culture.

Condominium Developers and Shen Yun sponsors Nick Gouletas and his wife, Natel Matschulat Gouletas were among the enthusiastic audience on Saturday night.

Ms. Matschulat Gouletas thought the show was fabulous. “You feel as if you’re in a paradise of some sort, with this beautiful music, the costumes, the colors, the movement. It is just something that completely takes you away from your world, from your universe. The only thing I can think of is paradise. Really magnificent.”

She was also very impressed with the perfect coordination of the delicate and expressive movements of the dancers. “The whole thing is a performance of a whole group, it’s not just a performance of just individuals. It’s really perfect.”

Chinese Classical Dance is one of the most comprehensive dance systems in the world. Its own unique system of dance postures and physical expression enables it to convey deep emotions and inner worlds through beautiful movements. The flips, spins, high-flying jumps, and other difficult tumbling techniques often wow Shen Yun audiences.

Mrs. Matschulat Gouletas really like all aspects of the show. “And the colors. They were all so beautiful; so gorgeous, you know the colors. It is impossible to really start to separate and say that this is better or that is better. They are all fantastic. You really feel like you’re in paradise.”

Shen Yun displays the grandeur of its heritage in full splendor with hundreds of colorful, handmade garments spanning China’s regions, dynasties, and ethnicities.

Vividly animated backdrops extend the stage and transport the audience to different times and locales in China and even to different dimensions. Shen Yun’s projection designs synchronize all aspects of the stage—costumes’ colors, specific dance movements, props, lighting, the music of the live orchestra—for a seamless integration

“Very, very interesting, and the music is beautiful—the voices, the colors are incredible. The movements. I cannot say enough great things about it. Thank you so, so much,” Ms. Gouletas said.

Her husband, Mr. Gouletas felt that the Shen Yun performance was “mind opening.” He mused that after leaving this world, “They [the divine] are going to look at your deeds and see whether you left it [the world] a little bit better than you found it. And I think it opens your mind to that kind of thinking.”

Regarding the theme of good vs. evil he said, “I think the evil kind of represented where our thinking is today, instead of being more like what the Creator would want us to think about and how we should conduct ourselves.”

Ms. Matschulat Gouletas closed the interview by saying, “We are all very lucky that this exists and that we have the opportunity to be exposed to it and to enjoy it. Thank you so, so very much. It’s just such a fantastic event. A fantastic performance.”