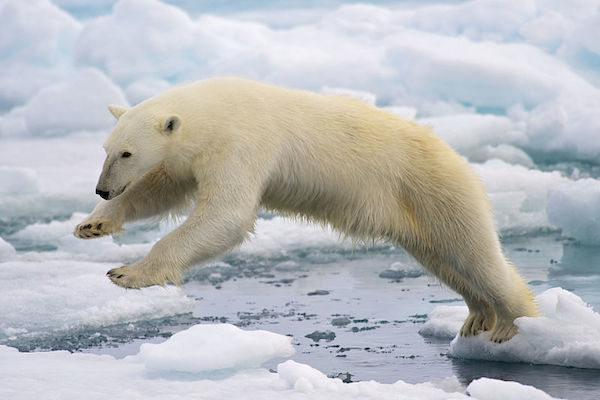 Chukchi, where the proposed exporatory drilling is to take place, is home to about 2,000 polar bears. The species is currently declining as global warming melts the sea ice on which it depends. Photo by Arturo de Frias Marques.
Environment

Earlier this week, the Bureau of Ocean Energy Management (BOEM) approved Shell Gulf of Mexico Inc.’s multi-year Exploration Plan for the Chukchi Sea off the northern Alaska coast. Environmental groups have raised concerns over the approval, saying drilling in the area threatens wildlife, puts workers at risk, and will further contribute to global warming.

Under the plan, Shell proposes drilling up to six wells 70 miles off the remote northern Alaska coast. The agency granted approval after reviewing the plan and an environmental impact assessment, discussing it with stakeholders, and ruling the project will have no significant impact on the environment. Shell won’t receive full approval of the plan until they are granted a remaining set of drilling permits, which are contingent on proving they can take care of any spills or accidents that may happen.

The approval has been met with ire from many conservation organizations and scientists.

BOEM is administered under the Department of the Interior, which in 2013 warned of the dangers of drilling in the Arctic Ocean after previous disastrous drilling attempts by shell in 2012. A subsequent governmental review found the company failed at many operational tasks, such as towing one of the company’s two drilling rigs that ended up running aground – no injuries or major oil spillage resulted.

A U.S. Coast Guard report on the accident concluded its cause was due to Shell’s “inadequate assessment and management of risks.”

Adding to the risk is the Chukchi Sea itself. Located above the Alaska mainland in the far north, the Chukchi is prone to extreme and unpredictable weather events that studies say will only become more intense as global warming strips the Arctic of its protective sea ice. Making things more worrisome, critics say, is the remoteness of the area would mean it would take significant time to mobilize cleanup and rescue crews in the event of an accident. The closest Coast Guard station that has the capacity to respond to a spill is reported to be 1,000 miles away from the proposed drill sites.

And accidents do happen. One need only be reminded of the Deepwater Horizon disaster, which killed 11 people and released an estimated 4.9 million barrels of oil into the waters of the Gulf of Mexico over the course of five months in 2010.

“Vessels and the operations they conduct are growing more complex, and the risks that accompany these operations increase, whether in Alaskan waters or not,” the U.S. Coast Guard wrote in their report on Shell’s 2012 incident. “The failure to adequately understand, respect, and not complacently assume past practice will address new risks, is critical both in practice and in company culture.”

Many conservation organizations are criticizing the approval, cautioning that drilling may lead to local disaster and will most definitely contribute to global warming. Even BOEM acknowledged in a February report that there is a 75 percent chance that at least one large spill will happen in the region in the next 77 years if extraction follows exploration.

“Arctic drilling is a step in the exact wrong direction,” Center for Biological Diversity’s Alaska Director Rebecca Noblinsaid in a media release. “Scientists tell us that if we want to avoid the worst effects of climate change, we need to keep Arctic oil in the ground. Arctic drilling gives us a 75 percent chance of an oil spill and a 100 percent chance of climate catastrophe.”

A follow-up from BOEM clarifies that the 75 percent risk of a large-scale spill does not pertain to exploratory drilling, which is what Shell’s current plan proposes.

According to BOEM’s statement, Shell’s exploratory operations in the Chukchi will include control measures such as”blowout prevention technologies,” and improvements in monitoring and containment.

“We have taken a thoughtful approach to carefully considering potential exploration in the Chukchi Sea, recognizing the significant environmental, social and ecological resources in the region and establishing high standards for the protection of this critical ecosystem, our Arctic communities, and the subsistence needs and cultural traditions of Alaska Natives,” BOEM Director Abigail Ross Hopper said in the statement. “As we move forward, any offshore exploratory activities will continue to be subject to rigorous safety standards.”

But how much will these safety standards extend to the wildlife that inhabits the Chugchi Sea? The region is home to species such as spectacled eiders (Somateria fischeri), bowhead whales (Balaena mysticetus) and about a tenth of the world’s polar bears (Ursus maritimus). According to U.S. Fish and Wildlife consultation letters sent from BOEM to Shell, the company must abstain from drilling between July and September when eiders are molting and are less able to move away from drilling operations.

But if extractive drilling follows exploratory drilling, conservationists worry it may spell disaster for the Chukchi’s ecosystems, as well as the global climate.

“Yesterday’s announcement is inconsistent with the federal government’s commitment for stewardship of the Arctic Ocean, it is inconsistent with President Obama’s commitment to combat climate change, and it is a clear prioritization of Shell’s needs ahead of the protection of one of our most important natural resources,” Michael LeVine of Oceana, a marine advocacy organization, told The Guardian, adding that a spill would have “catastrophic effects on the area’s wildlife and devastate one of the last intact marine ecosystems in the world.”

While Shell still needs to prove to the government it can adequately handle problems that may arise before it can commence drilling, the company isn’t wasting any time getting ready. On Thursday, a rig optimistically destined for Chukchi arrived at a Seattle port on its way north, the Seattle Times reported. The rig is to be the largest piece of the 25-vessel fleet Shell will use for its project.

This article is written by Morgan Erickson-Davis, a contributing writer for news.mongabay.com. This article was republished with permission, original article here.