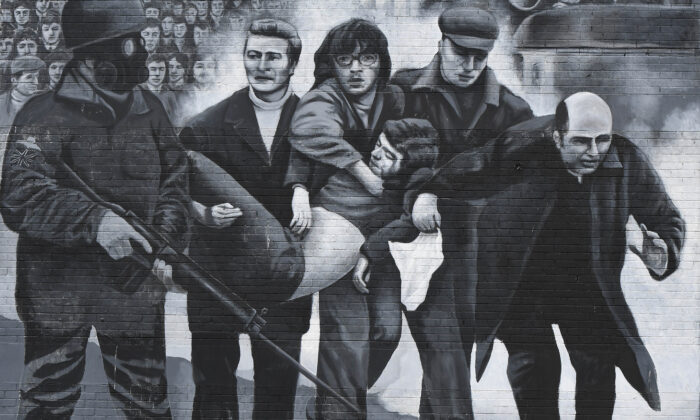 The British government’s latest attempt to deal with more than 1,000 unsolved killings during The Troubles in Northern Ireland has highlighted a “hole” in the Good Friday Agreement, says a leading expert on conflict resolution.

Duncan Morrow, a politics professor and director of community engagement at Ulster University, said there was “suspicion” the Northern Ireland Troubles (Legacy and Reconciliation) Bill was driven by an attempt to pacify Tory backbenchers who wanted to avoid British Army veterans being prosecuted.

In May 2021 the trial of two former British Army soldiers charged with murdering Joe McCann, an Official IRA man, in 1972, collapsed.

But the government has slightly changed its position and the new bill would introduce an Independent Commission for Reconciliation and Information Recovery (ICRIR), which would have the power to give immunity only to those who cooperate with its investigations.

Morrow told The Epoch Times, “The British government is under pressure from its own backbenchers but they have replaced a general amnesty with a conditional amnesty and that is a significant change.”

But he said there remains “suspicion” about the British government’s motives.

Padraig O’Muirigh, a lawyer who has represented the families of many victims from both the Irish republican and nationalist community and the loyalist/unionist side, said the bill, which was published on May 17, was an attempt to allow British Army veterans to “escape justice.”

O’Muirigh told The Epoch Times, “This process is skewed towards state actors … there is very little optimism about this process and a lot of concerns.”

More than 3,600 people were killed during The Troubles—the period of sectarian strife between 1969 and 1998 when the Provisional IRA sought to force a united Ireland through terrorism—and 1,000 of those killings remain unsolved.

The Good Friday Agreement, which ended The Troubles, allowed for convicted killers on both the republican and loyalist sides to be freed from prison but did not set down a process for what should happen if new evidence emerged about the unsolved killings.

But Morrow said: “The Good Friday Agreement was very future-oriented, the ‘best memorial to the past is to create a better future’ and all that. A political decision was taken that they would never get an agreement if they included this.”

Former Prime Minister Tony Blair’s government decided against following the model of South Africa’s Truth and Reconciliation Commission, which was set up in 1995 to examine crimes committed during the apartheid era, and offered complete amnesties to people like Craig Williamson, a police officer who killed an anti-apartheid activist and her 6-year-old daughter with a letter bomb.

He said that decision to omit a mechanism to deal with unsolved killings had “haunted” Northern Ireland, despite various attempts to tackle the legacy of The Troubles, such as the Eames Bradley Report in 2009 (pdf).

Morrow said the Police Service of Northern Ireland set up the Historical Enquiries Team in 2005 but it was later abandoned because “it was seen to be not pursuing members of the armed forces with the same energy” as in other cases.

Helen Deery, whose 15-year-old brother Manus was shot dead by a soldier in Londonderry in 1972, told BBC’s “Good Morning Ulster” on May 18: “I won’t rest until he gets justice. I remember him as a beautiful, funny, intelligent, wee boy. He had his full life ahead of him.”

Ian Jeffers, the new commissioner for victims and survivors in Northern Ireland, told the same programme: “Victims’ families want justice and that is the key thing. In the short time I’ve been in the role that’s what I have heard from victims’ groups and individuals. They still want to know who planted the bomb, who pulled the trigger and why, and as long as there is a slim chance that they could find that out they don’t want that removed from them.”

The ICRIR would operate for five years and a panel within it would decide if a perpetrator qualified for immunity, depending on whether they had been truthful and forthcoming about a killing.

O’Muirigh said: “There is no issue with a proper truth recovery process but this process is skewed towards state actors. They are stopping inquests, like the one we had last year for the Ballymurphy massacre, and shutting down civil actions, and they have been important in getting full discovery in legacy cases.”

But he said conditional amnesties would “let soldiers escape the criminal justice process” and that would undermine reconciliation in Northern Ireland, he added.

The bill took many people by surprise when it was unveiled. It included a clause that civil actions could not be launched after it was given its first reading, which took place this week, which O’Muirigh said was “scandalous.”

O’Muirigh said he expected the legislation would be challenged in the courts.

More than 2,100 deaths during The Troubles were committed by the Provisional IRA and other republican groups, and O’Muirigh said there were doubts whether former IRA combatants would engage in the process because it was not perceived to be a “victim-centred” approach.

Morrow said he suspected some former IRA men would come forward to give information about crimes they committed in return for amnesties, but he said it was unlikely republican organisations would agree to it.

He said it was also not clear if former loyalist paramilitaries would want to give information about alleged collusion with the security forces if it puts them or others “at risk.”