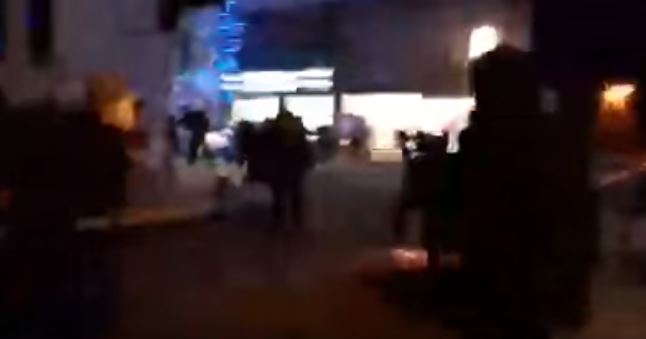 Katie Nelson, a Concordia University student, says she was shoved by an undercover police officer during an anti-austerity protest in Montreal on December 18.

Nelson says the attack came after she spotted an officer who she has a current lawsuit against.

“I was attacked by a cop wearing black bloc after recognizing a police officer I’m suing dressed in black mask,” she wrote on Facebook.

“Ten minutes later the same undercover cops pulled a live gun on others. Same cops who earlier were breaking stuff and challenging riot police as ‘anarchists.'”

Nelson said she went to the hospital by ambulance and got x-rays because of the pain suffered from what happened. She was diagnosed with a concussion, a contusion to her arm, and a knee injury.

She later posted pictures she said confirms her story.

The police who attacked me, and a couple of the injuries.

“I recognized him immediately. He is in my lawsuit. There are many cops in the lawsuit and he is one of them,” Nelson told the Montreal Gazette. She’s suing the police and the city over thousands of dollars in fines during protests over proposed tuition hikes in 2012, claiming she was targeted by police for her political beliefs.

Nelson says an officer wearing a black mask and pretending to be a protester took the mask off and said “Let’s go comrades.”

“That’s when he recognized me. He put his mask on and turned to another person next to him and started whispering in his ear,” Nelson said, adding when she confronted the undercover officer he started swearing at her.

She then yelled “that’s a cop!” but soon another masked person pushed her to the ground. Nelson said she “flew” from the push, and suffered the injuries.

Katie Nelson, 23, said she was taken to a hospital by ambulance after having been shoved from behind by someone she…

Montreal police spokesperson Constable Louis Héroux said he couldn’t comment on the allegations, but he did say undercover officers were used during the protest.

“It is not a standard practice. There are occasions when there are officers in plain clothes who are inside the protest,” Héroux said, adding the decision to use the tactic is based on what kind of groups are involved in a protest. “In this case, yes, there were undercover officers. But it’s one of the strategies we do use when we judge that certain protests might go sour.”

The Canadian Press reported that eight people were arrested at the protest, on charges ranging from uttering death threats, assault with a weapon, obstructing police and intimidation.

Police said several people were injured when they fell running.

About 100 people took place in the march, which was declared illegal because the group hadn’t notified police of the route beforehand.