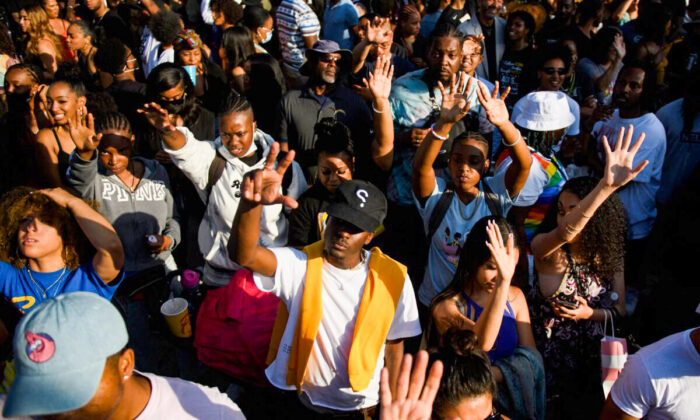 In this file photo, people attend the Leimert Park Rising Juneteenth celebration to mark the end of slavery, in the Leimert Park neighborhood of Los Angeles on June 19, 2021. (Patrick T. Fallon/AFP via Getty Images)
Southern California

LOS ANGELES—A parade in Inglewood, a classic music and dance festival in the Crenshaw district, a celebration in Culver City and concert at the Hollywood Bowl were scheduled for June 19 to mark Juneteenth, the federal holiday commemorating the emancipation of enslaved people in the United States.

Slavery did not fully end in the United States until more than two years after the Emancipation Proclamation was issued in 1863. Enforcement of President Abraham Lincoln’s proclamation generally relied on the advance of Union troops, and word did not reach Galveston, Texas until June 19, 1865.

The third annual Juneteenth Drive-Thru Parade started at 11:15 a.m. at Inglewood High School. The Los Angeles Rams served as the parade’s grand marshal with their cheerleaders and mascot Rampage leading the parade with the Vince Lombardi Trophy in hand. The Rams provided Rams-branded car flags to attendees.

A Freedom Fest with music, food vendors and games will run through 5 p.m. on Grevillea Avenue near Inglewood City Hall.

“Juneteenth: A Classical Music and Dance Festival” began at noon at the Lula Washington Dance Theater in the Crenshaw district. The festival will include music, dance and a reading of Gwendolyn Brooks’ poem “Primer for Blacks.”

Culver City is hosting what it is billing as a “special event in celebration of Black music, spoken word and dance” from 1-6 p.m. at The Culver Steps with Aloe Blacc, Will Gittens, and the Benkadi African Drummers among the performers.

Thomas Wilkins and Derrick Hodge will lead the Re-Collective Orchestra, the first performance by an all-Black symphony orchestra in the Hollywood Bowl’s 100-year history. Musical direction for the night will be provided by Adam Blackstone and Questlove.

The Los Angeles Dodgers Foundation’s 50/50 Raffle for Sunday’s game against the Cleveland Guardians at Dodger Stadium will be dedicated to the California Funders for Boys & Men of Color Southern California.

The organization describes itself as aligning the resources, networks and voices of California’s foundations with the goal of improving opportunities for African American, Latino, Asian Pacific Islander, and Native American boys and young men.

“Juneteenth is a day to reflect on both bondage and freedom—a day of both pain and purpose,” Biden declared in his proclamation declaring Sunday as the Juneteenth Day of Observance. “It is, in equal measure, a remembrance of both the long, hard night of slavery and subjugation, as well as a celebration of the promise of a brighter morning to come.

“On Juneteenth, we remember our extraordinary capacity to heal, to hope, and to emerge from our worst moments as a stronger, freer, and more just nation. It is also a day to celebrate the power and resilience of Black Americans, who have endured generations of oppression in the ongoing journey toward equal justice, equal dignity, equal rights and equal opportunity in America.”