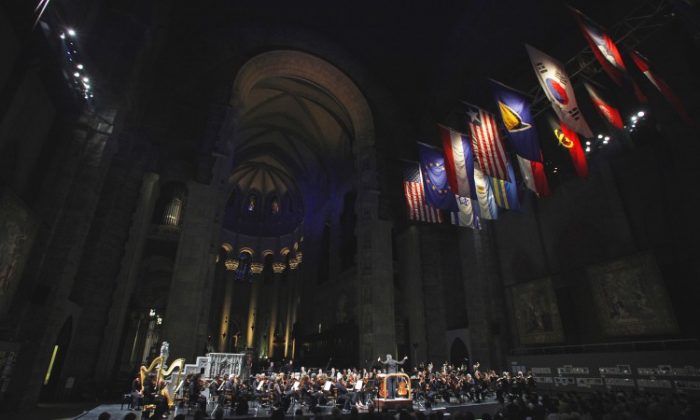 The New York Philharmonic performs a free concert at The Cathedral Church of Saint John the Divine on Memorial Day, May 28. (Michael DiVito)
US

Tickets were given out on a first come, first served basis, compliments of the Anna-Maria and Stephen Kellen Foundation. A line, which formed around 6 p.m., wrapped around the building as volunteers carefully counted people to fill the seats inside. The concert was also broadcast outside on the Pulpit Green to those who could not get in.

The sounds of both a Debussy and Tchaikovsky, conducted by Alan Gilbert, filled the cavernous ceiling of the church. The show, which lasted almost an hour and a half, delighted the 2,200 in attendance, some who had never seen a symphony before.

The New York Philharmonic plans to hold the free concert again next year with muisc from Anton Bruckner.

Earlier in the day, the InterSchool Orchestras of New York Symphonic Band performed at Brooklyn’s Historic Green-Wood Cemetery. The group helps youth learn to play instruments and sharpen their skills through financial assistance and free music lessons, among other initiatives.

“This Memorial Day, as we enjoy music that celebrates the American experience, we are also reminded of all those brave patriots and heroes who paid the ultimate price so that we might live in freedom,” said Richard J. Moylan, president of Green-Wood Cemetery, in a release. “I would like to thank Brian Worsdale and the ISO Symphonic Band for helping us remember their sacrifices as we honor America.”

With additional reporting by Kristen Meriwether.