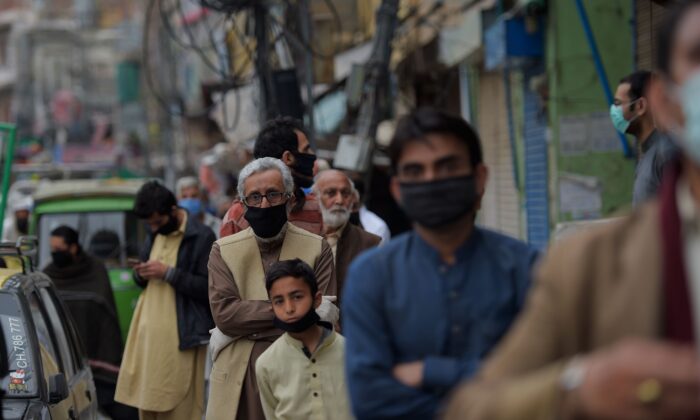 Pakistani peoples line up to pay utility bills in a bank during a government-imposed nationwide lockdown as a preventive measure against the COVID-19 coronavirus in Rawalpindi on March 30, 2020. (FAROOQ NAEEM/AFP via Getty Images)
By Emel Akan

WASHINGTON—China has lured many countries into a debt trap through its Belt and Road Initiative (BRI) in recent years, and now there is a growing concern in Washington that Beijing could exploit the ongoing pandemic to further expand its geopolitical influence through predatory practices.

China’s BRI, also referred to as “One Belt, One Road” or the “New Silk Road,” is one of the world’s most ambitious and controversial development programs. Since its launch in 2013, Beijing has poured billions of dollars into emerging countries to help build massive infrastructure projects.

In recent years, the BRI has come under scrutiny, as most of the projects are financed through Chinese state-controlled lenders with a lack of transparency, leaving borrowing nations distressed by massive debt burdens. Beijing has come under fire for setting a “debt trap” to seize control of strategic assets in emerging countries.

Sri Lanka’s Hambantota port has been cited as a classic example, as a Chinese state-owned firm took control of the port on a 99-year lease after Sri Lanka defaulted on its loans.

The Trump administration has voiced a hard line against China’s ambitions to grow its footprint in emerging markets, and the CCP virus outbreak has amplified these concerns.

“These emerging market countries are going to be in a world of hurt,” a senior administration official told The Epoch Times.

The official said there’s an urgent need for debt relief in these countries.

In recent years, the Chinese regime has fostered its “debt trap” diplomacy with the concept of “building a community of common destiny” for mankind, the official noted.

If China is really promoting a community of common destiny, “then they should jump on the bandwagon for debt relief.”

“But chances are they’re going to fight that tooth and nail. And we’ll be able to use that to call them out consistently on their bad practices in emerging markets.”

However, “China is not interested in the self-reliance of these countries. China, the PRC, is interested in perpetuating dependence.”

The World Bank Group and the International Monetary Fund in March urged all official bilateral creditors to suspend debt payments from the world’s 76 poorest countries and allow them to redirect funds toward fighting the pandemic.

World Bank President David Malpass, during the Group of Twenty (G-20) finance ministers conference call on March 23, raised this issue and asked the G-20 economies including China to provide immediate debt relief to the 76 countries.

“This crisis will likely hit hardest against the poorest and most vulnerable countries,” Malpass said on the call. “Many were already in a difficult debt situation, leaving no space for appropriate health and economic response.”

The World Bank could provide up to $35 billion and identify additional resources for these countries. However, these resources shouldn’t go to pay creditors, he added.

The pandemic has awakened many advanced economies to the real danger of being overly dependent on the Chinese regime for vital products such as medical supplies and life-saving drugs.

“The Chinese supply chain is the single point of failure in the global response to the coronavirus outbreak,” the senior administration official said.

The U.S. government is now speaking with counterparts in the Group of Seven (G-7), as well as countries such as Mexico and India, the official said, about the need to reexamine global supply chains.

The U.S. government has criticized Beijing for using the pandemic to advance its agenda overseas. China has been engaged in a wide-reaching propaganda effort on social media, portraying itself as a compassionate global superpower assisting Western countries.

Speaking at a press briefing on March 26, James Richardson, director of the Office of U.S. Foreign Assistance Resources, said the Chinese regime shouldn’t exploit the pandemic.

“I would just say that the Chinese Communist Party has a special responsibility to provide no-strings-attached assistance around the world and take responsibility for what everyone realizes is the result of the coverup that happened in Wuhan,” Richardson said.

“We can’t burden financially difficult countries facing this pandemic in addition to their economic conditions. We should not ask them to take on more debt to keep their people healthy.”

Experts and media reports claim that the regime has deliberately masked the total number of COVID-19 cases in China in a bid to safeguard its image both nationally and internationally.

Chinese officials and state-run media have attempted to shift the blame for the regime’s failure to contain the virus by pushing conspiracy theories targeting the United States as part of an aggressive global disinformation campaign.