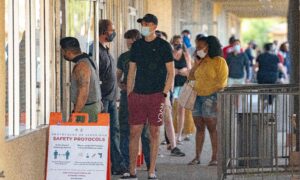 Concerns Over Voting With Sharpies in California

The Giordano family in southern California went to cast their votes at a local polling station on Election Day but said they felt uneasy that poll workers made them fill out ballots with Sharpie pens instead of ball-point pens, although there were both types of pens available at the poll station.

Scott Giordano said he grew concerned about the use of Sharpies because he has voted many times throughout his lifetime, but has never seen Sharpies used at polling stations prior to this election.

Scott’s daughter is a first-time voter. She told us that she felt worried while casting her ballot. She asked for a pen but the poll worker gave her a Sharpie instead.

Similar concerns over Sharpie use at polling stations have also surfaced in Arizona, with many voters saying that poll workers made them use Sharpies even though the pen bled through the paper.

Election officials in Arizona’s Maricopa County, however, have denied the claim that Sharpies invalidate votes.